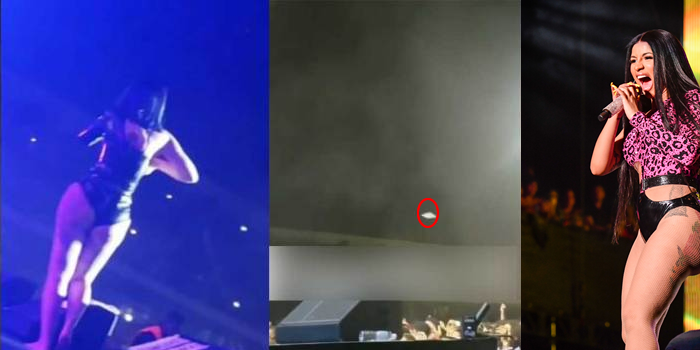 The fun of the Cardi B Livespot festival at the Accra Sports Stadium was nearly marred as some angry fans decided to throw bottles onto the stage.

There was and still an uproar on social media following the so-called Ghanaian celebrities who were snubbed by American female rapper, Cardi B during her visit to Ghana over the weekend.

It wasn’t her inability to meet the so-called celebrities which were the disappointment of the day, the show also experienced some glitches and this got people who were eager to experience a lifetime concert.

Cardi B’s Livespot festival which was held at the Accra Sports Stadium experienced delays which compelled angry fans to throw bottles on the stage.

In videos making waves on the Internet, fans had to wait for over a period of 1 hour before the next performance and that led to the throwing of bottles on the stage.

Apparently, things were really not organised to meet the expectations of fans and music lovers who trooped into the stadium to watch various performances from top Ghanaian musicians as well as Cardi B.

Cardi B saved the night when she jumped on the stage and thrilled fans with her energetic performances with dancers.