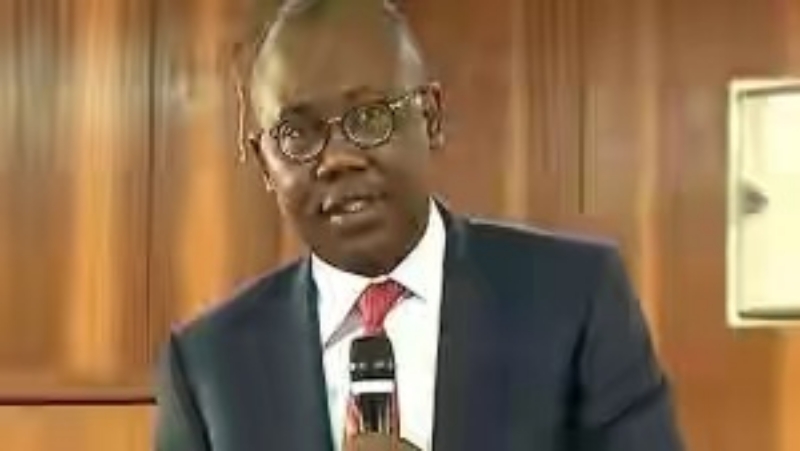 BREAKING: EFCC picks up Adoke on arrival from Dubai

The Economic and Financial Crimes Commission (EFCC) has picked up a former Attorney-General of the Federation and Minister of Justice, Mr. Mohammed Adoke( SAN) upon arrival from Dubai, United Arab Emirates.

Adoke is being probed alongside others over $1.06billion Malabu Oil Block ( OPL 245) deal.

The ex-AGF was arrested in Abu Dhabi on November 11 after being watch-listed by the EFCC.

But after a month in the custody of the International Police( INTERPOL) in the UAE, Adoke voluntarily offered to return to the country for interrogation by the EFCC and trial.

He was in a white Kaftan with a white cap, as he arrived at the Nnamdi Azikiwe International Airport, Abuja aboard Emirates flight (Boeing 777 -300ER) at 3.45pm.

He was however picked up by EFCC operatives and transferred into a Toyota bus marked RBC 931 BV while reading a book he brought from Dubai.

As at press time, he was waiting for airport formalities before being moved out to the EFCC headquarters in Abuja.

Adoke’s counsel, Mike Ozekhome(SAN) in a statement, said Adoke returned on his own volition because he has nothing to fear. He said Adoke is not afraid of trial.

The statement reads in part: “Our client told them that he was ready to return to Nigeria on his own accord after his medicals; yet, they still kept him in illegal custody for over one month, after running into a legal logjam. It was very clear to them that the Government of Nigeria did not have any legal basis or grounds to extradite Mr Adoke back to Nigeria.

According to him he decided to come back to the country based on legal advice.

The statement added: “Adoke, based on our legal advice, has therefore decided to break this unnecessary logjam and simulated stalemate that are already causing Nigeria international embarrassment by buying his own ticket to return to Nigeria voluntarily and peaceably, instead of going to another country of his choice.”