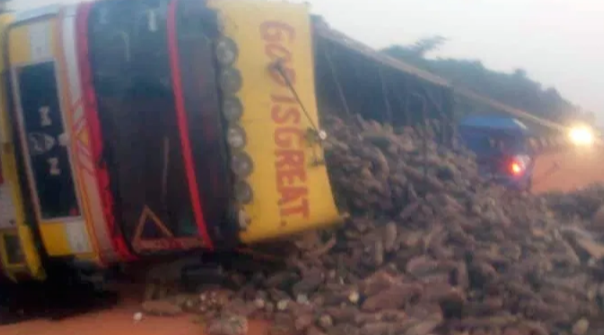 No fewer than four persons reportedly dead and four passengers severely injured in a lone accident which involves a truck at Pipeline Junction, Ogere Remo axis of Ibadan-Lagos Expressway on Thursday, January 2nd.

He said the crash occurred around 4.30 a.m. He highlighted that the truck, with registration number TKP 653 XA, which was loaded with yams, lost control.

The red coloured Man Diesel truck, which was coming from the North and in bound Lagos, had 14 passengers, presumed to be owners of the products, sitting on the top of the yams when the accident occurred, he added.

“The casualty was much because some of the passengers, who are also likely owners of the yam, were seating on the yam in the open space at the back. Thus, when it lost control due to overspeeding and poor visibility, (they) fell by its side, with the yam and vehicle falling on them” Akinbiyi said.

Akinbiyi said four of the passengers died on the spot while the injured were taken to Idera Hospital, Sagamu. The agency’s spokesperson said the deceased were taken to FOS mortuary, Ipara Remo, as at the time of filing this report, while the vehicle has been taken to the Police Motor Traffic Division, Iperu-Remo.

Akinbiyi said the command commiserates with the family of the dead and injured. He advised motorists to ensure their vehicles are well maintained, avoid overspeeding and night travel as much as possible, especially now that that the harmattan season, with its poor visibility, is here.