Annie Macaulay–Idibia is a Nigerian, model, presenter and actress. She is married to Nigerian legendary musician, Innocent Idibia also known as 2Face or 2Baba.

Annie Macaulay–Idibia was born in Ibadan, Oyo state, on November 13th, 1984. An indigene of Eket in  Akwa Ibom state. Annie was born into a rich family, as her father was a staff in Mobil, Eket. However, she couldn’t enjoy his material possessions as he divorced her mother. This occurrence had a devastating effect on Annie and her siblings (3 brothers) since their mum was a full-time housewife. Annie’s mum however, took on a job as a cook in Mobil, and eventually relocated to Lagos.

Annie had her primary education in Ibadan and her secondary education in Lagos where she lived with her mum and siblings in Jakande Estate, Lekki, but later relocated to Thomas Estate. She also had to take up some jobs after secondary school and occasionally helped out in her mother’s shop.

She lost one of her brothers to tuberculosis within this period, and it further marred her childhood experience.  She attended Lagos State University where she obtained a degree in Computer Science. She also a earned degree in Theatre Arts from the prestigious University of Lagos.

Annie set off to try out a couple of things early in life while discovering herself. She started off as a model while earning as little as N2000.and competed at the Queen of All Nations Beauty Pageant, where she came out as the second runner-up. She also featured in 2face’s music video for his legendary song African Queen. She had also begun acting while in the university, featuring in minor roles.

Annie also attended many auditions before she became popular for her roles in the movies titled Pleasure and Crime, Alakada Reloaded and Blackberry Babes. She has since featured in over 80 movies. She presently owns BeOlives Hairline and has an International Studio in Atlanta, Georgia.

Annie won the African Entertainment Legend Awards- Fast Rising Actress and was nominated as Best Supporting Actress in the 2009 Best of Nollywood Awards.

In 2016, Nollywood actress and 2face Idibia’s wife, Annie Macaulay took to Instagram to expose a lady whom she accused of ‘bugging her family’. She however deleted the post almost immediately but not before some fast fingers screen grabbed it.

A report claimed the lady allegedly once had an affair with 2face Idibia. 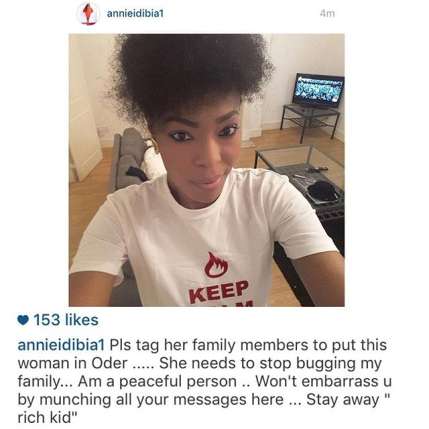 According to reports, the lady allegedly identified to be named Ayabime Okpo is related to the embattled founder of Daar Communications, Raymond Dokpesi.

Like Annie referenced in her post, Bime as the lady is known as is from a rich home. She allegedly started dating 2face years ago while she was an undergraduate at the University of Lagos.

Bime is alleged to have returned into the life of the music superstar recently which Annie got wind of and allegedly decided to expose her on social media.

Earlier this year, 2baba decided to use his social media platform to apologise to his wife of seven years.

Annie is married to her longtime boyfriend 2face Idibia, whom she first met in 1999. They had their luxury wedding in Dubai, on March 23rd, 2013. There has been a lot of controversy regarding their relationship, judging from the fact that her husband, 2face Idibia, has several children with other women.

Nevertheless, Annie has remained with her husband, very unlikely to separate from the relationship. She has 5 step-children- Innocent Idibia (born in January 2006), Nino Idibia (born in April 2008), Rose Idibia, Justin Idibia and a son who’s name is unknown (born in April 2012), and two biological children – a daughter Isabella Idibia, in December 2008 and her second, Olivia Idibia in January 3rd, 2014.