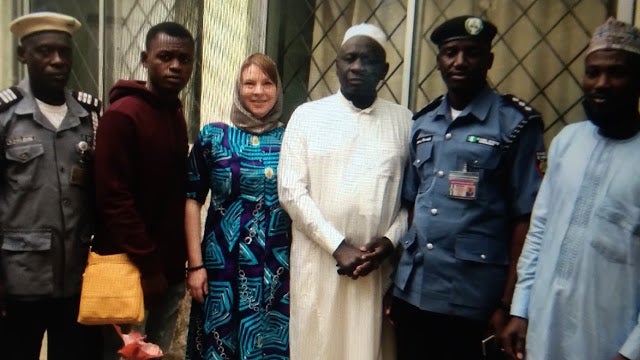 A 46-year-old American woman, Jeanine Delsky who is in Nigeria to meet her 26-year-old Nigerian boyfriend Sulaiman Babayero Isa and his family, has been invited for questioning by the Sharia Police in Kano state.

According to viral reports, the duo met on Instagram and kick-started their relationship on the platform before taking it serious offline. She arrived in the country some few days ago and reports on the incident went viral.

Although the details of the meeting with the Sharia Police, popularly referred to as Hisbah, was not disclosed because it held behind closed doors, the father of the young man, Alhaji Sulaiman said he would get all the necessary support his son needs to ensure he has a successful marriage.

Ms Delsky while speaking to newsmen said many people had courted her online but she found Mr Isa as the most loving and sincere.The mother of two said they both agreed to get married and fly to the US where they intend to settle.

Ms Delsky said she decided to follow her boyfriend to Kano because of her love for him.

Mr Isa, who has just finished secondary school, said that he is ready to follow his girlfriend to America to settle and build a family.

75-year-old man and woman, 82, wed in Kano after eight-month courtship