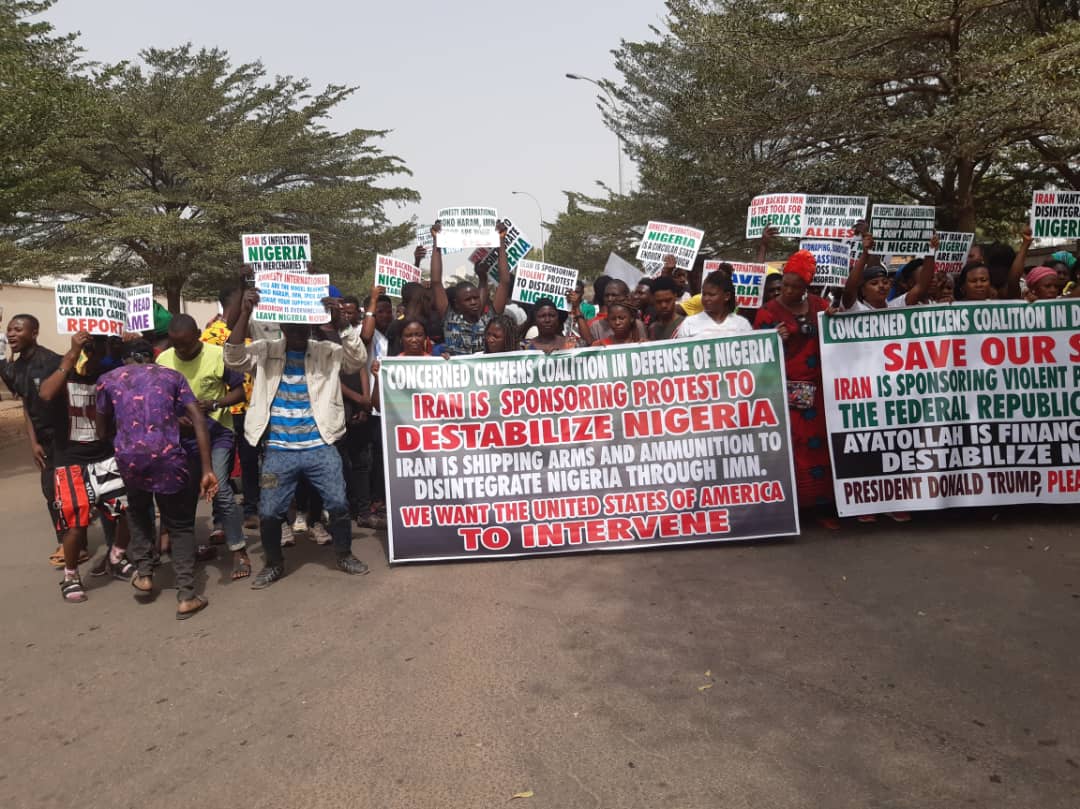 Iran Must Go: 1,000 protesters deliver petition to US, Trump to intervene in plot by Iran, AI to destabilize Nigeria

No fewer than 1,000 Nigerians have signed a petition calling on the United States of America to intervene in a plot by Iran and Amnesty International (AI) to destabilize the country.

The petition, addressed to US President Donald Trump, through the US Ambassador to Nigeria, seeks to end Iranian government’s avid sponsorship of groups/individuals truncating Nigeria’s democracy.

With the help of proxy Islamic Movement in Nigeria (IMN), the Asian nation seeks to establish Islamic Caliphates in Nigeria in whatsoever way possible, even if it means shedding blood.

Amongst others, convener Mohammed Ibn Shuaibu reminded the US president that it is the same IMM that burnt the country’s flag and carried placards condemning the killing of General Qassem Soleimani, chanting, “Death To America.”

According to the petition, Iran has been shipping in ammunition and arms into Nigeria while also nurturing fighters in other countries .

These Nigerians reckoned that if nothing is done, Iran’s dangerous schemes may escalate, especially now it has formed an alliance with Amnesty International.

The 1,000 Nigerians, therefore, urged the US to step in and activate measures that would support the efforts of the security agencies in Nigeria.

Read the full petition below:

Through:
The Ambassador of the United States of America in Nigeria
Abuja-Nigeria.

This is indeed trying times for Nigeria with the renewed onslaught against our nascent Democracy by forces that are known to be harbingers of terrorism all over the world.

This letter cannot be written at a time better than now in the light of the threats posed by the Islamic Republic of Iran to the relative peace and tranquility in Nigeria with their avid sponsorship of groups/individuals with the sole intention of truncating Democracy in Nigeria and establishing Islamic Caliphates using their proxy-The Islamic Movement in Nigeria (IMN).

Dear Mr. President, you may wish to know that the Islamic Movement in Nigeria (IMN) is an offshoot of the Islamic Republic of Iran formed about four decades ago; it advocates the creation of an Iranian-style Islamic state in Nigeria.

Dear Mr. President, the activities of the IMN was banned in Nigeria because it had resorted to violence as a means of entrenching their ultimate aim of an Iranian-style Islamic state in Nigeria. This is on the heels that Iran has provided the IMN with financial and political support since its inception.

This has enabled the IMN to increase its presence in northern Nigeria as part of Iran’s drive into West Africa. The IMN has established a network of Shiite seminaries, schools, organizations, and a martyr’s foundation, wholly funded by Iran.

Dear Mr. President, Iran has sought to increase its influence in certain countries in Africa in recent years through activities such as arms sales, training fighters for combat in the Middle East, and funding Shia sects such as the Islamic Movement in Nigeria.

It could thus be agreed that Nigeria and other African countries could emerge as a venue for a confrontation between the U.S. and Iran as the Iranian authorities have threatened to retaliate after the U.S. airstrike that killed the Iranian Quds Force commander, General Qassem Soleimani.

Mr. President may wish to be informed that there was a violent protest in Nigeria by the IMN, They also burnt a flag of the United States of America and carried placards condemning the killing of General Qassem Soleimani and chanting, “Death To America.”

Dear. Mr. President, the reality before Nigeria is indeed stark and graving if urgent interventions are not made. The Iranians are going to want to show that they have influence on a global scale and they may look for low-hanging fruit or easier targets that they can go after, and that may very well occur in Nigeria with the increased funding of the IMN by Iran as well as the establishment of militant groups across Northern Nigeria to wreak havoc of unimaginable proportion.

It is also instructive to state that the Iranian Government has infiltrated Nigeria with tens of thousands of fighters that were mobilized and used for conflicts in Iraq, Syria, and Yemen and these fighters have been responsible for the upsurge of criminality in Nigeria manifest in rampant kidnappings, banditry, and other terrorist acts that if left unchecked might spell doom for Nigeria and by extension other African countries.

Dear Mr. President, as stated earlier, the main aim of the Islamic Movement of Nigeria is to propagate the ideology in Iran and turn Nigeria into an Islamic state, as was done in the Iranian Revolution of 1979.

We consequently wish to solicit the support of the United States to see the actions of the Islamic Republic of Iran as an affront to Democracy in Nigeria hence the need to activate measures that would support the efforts of the security agencies in Nigeria in curtailing the threats posed by the IMN. This is highly necessary given the fact that the IMN is now a global threat.

Dear Mr. President, this threat is real. The Islamic Republic of Iran wants to destabilize, destroy, and demonize the democratic process in Nigeria by sponsoring and financing activities that are capable of breaking the country into pieces.

We have it on competent authority how the Islamic Republic of Iran has been shipping arms and ammunition for use by the IMN and other proxy organization in an operation code-named “Armageddon” which is for killing and maiming, disrupting the peace and tranquility in Nigeria and establishing the Iranian caliphate in Nigeria.

Dear Mr. President, this is our appeal, and we are confident of the intervention of the United States in protecting the nascent democratic experience in Nigeria.

While anticipating a favorable response, please accept, as always, assurances of our highest regards.

Tboss shares photos of her breastfeeding moments with her daughter

Amnesty International, lawyers should be ashamed for failing to prove allegations…

Coronavirus: video shows moments a man slapped a soldier for punishing him