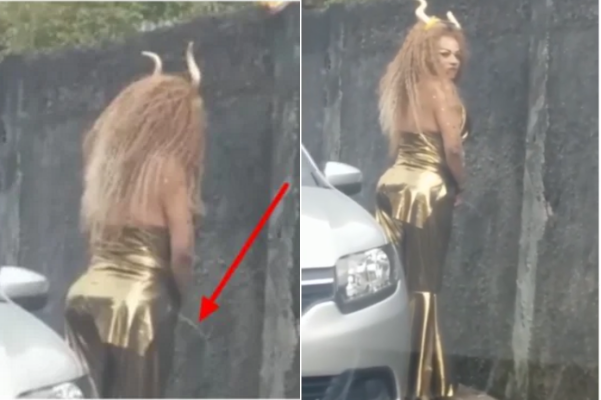 A video that has surfaced online show moment when a lady was caught on camera urinating on a walls as though she is a guy.

In the video, the woman could be seen beautifully dressed like a Maleficent in an all gold gown and a pair of horn on her head.

Apparently, the lady was not initially aware she was being filmed, as she could be seen holding on to something that appeared to be her genital and was doing her thing.

She eventually realized she was on camera, but didn’t bulge and continued until she was done. She then moved away from the spot as if nothing had happened. It is not clear if the fellow was dressed for a play, that is, a costume or so, and the place and time of the event is unknown to us as at the time of filing this report.

In other news, a man in his 40s has died in a hotel in Anambra shortly after taking sex enhancement drugs.