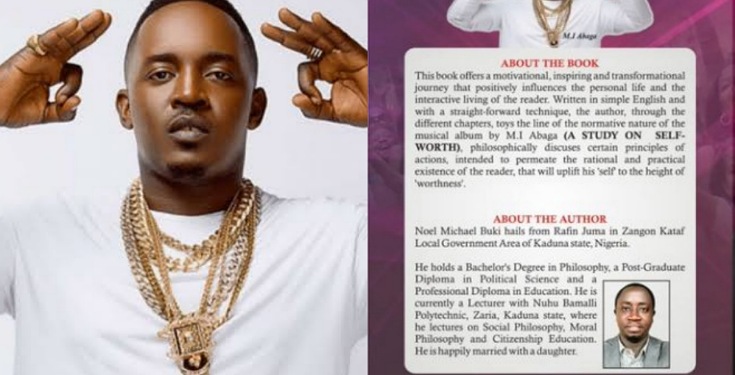 MI Abaga joins Fela, becomes second Nigerian musician to have a book in his honour

Nigerian rapper Jude Abaga popularly known as MI has become the second artiste after legendary Afrobeat star, Fela Kuti to have a book written in his honour.

Noel Michael Buki, a die hard fan of the award winning rapper, has written a book on the artiste and dedicated it to his inspirational views on life as reflected in his song.

Noel Buki took to the micro blogging platform, Twitter to share the news while revealing the book’s cover and also seeking MI’s permission to publish the book titled, The CROWDED SELF: An Exposition of MI Abaga’s “Study on Self-worth: Yxng DxnzL”.

MI who was ecstatic, gave his un-wavered go-ahead to the fan. Some other artistes like Falz and Naira Marley have been used as case studies and in school thesis but this new development will make MI the only other artiste apart from Fela to have a fan write an inspirational book on him to be published and distributed.

Some of the books published on Fela are; Afrobeat Fela and the Imagined Continent by Sola Olorunyomi and Dis Fela Sef, The Legend(s) Untold by Benson Idonije.

See MI’s exchange with the fan:

In other news, Seun Kuti took to his social media page to slam a woman for blaming her family misfortunes on his father Fela Kuti and for comparing the Legend with controversial music act,  Naira Marley.