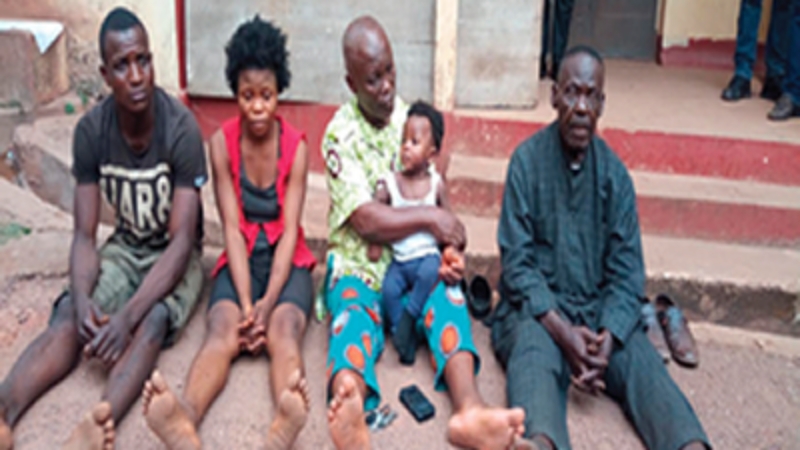 No fewer than 10 suspects have been arrested and paraded by the Enugu State Police for allegedly involving in child trafficking, armed robbery, cultism and murder.

The suspects were arrested by policemen attached to Operation Puff Adder as disclosed by the State Commissioner of Police, Ahmad Abdurrahman who paraded them.

Four of the suspects were identified as Benedict Agbodache (who claimed to be 87 years and a medical doctor), Hyacinth Onah (60), Uchechi Joseph (19-year-old mother of a trafficked child), and Abubarkar Idris aka Buhari (26) – for conspiracy and child trafficking.

According to report, Agbodache who manages Moonlight Hospital and Maternity, Bunker, Coal Camp, Enugu, was arrested for allegedly buying Joseph’s male child for N300,000 and selling same child to Onah for N1 million. Idris of Bunker, Coal Camp in Enugu reportedly acted as a middleman. A sewing machine and N700,000 were recovered from the suspects.

“The suspects were arrested by police operatives attached to Central Police Station (CPS) of the command following a report made on 5th March, 2020, about 7p.m., by one of the suspects, Joseph, that one of them, Abubakar Idris (also known as Buhari) took her to one nearby Moonlight Hospital and Maternity, where she was delivered of a baby boy. However, Dr. Benedict Agbodache of the said hospital/maternity bought the child at N300,000 from her and she used N45,000.

I killed my brother because my father loves him than other siblings,…

“Upon arrest, the doctor admitted to buying the child from his mother and selling him to Hyacinth Onah through Ukamaka Onah, his wife, at the sum of N1,000.000.

“The child has been rescued; while investigation is ongoing with a view to arresting more suspects and bringing them to book.”

Dominic Nwajobi (28) of Colliery Quarters in Coal Camp, Enugu was also paraded before  newmen for murder.

Reacting to the incident, the Commissioner said;

“The suspect was arrested on 9th March, 2020 by police operatives attached to Central Police Station of the command, following a report received from a complainant that on the same date about 11a.m., the complainant and the deceased, Emmanuel David, went to Colliery Quarters, Coal Camp, Enugu to sell Neolife health supplement products, and the suspect suddenly started attacking the deceased, claiming that he had warned him not to come to the area to sell the products again.

“As he was physically attacking the deceased, the deceased suddenly slumped and was immediately rushed to Eastern Nigeria Medical Hospital, where he was confirmed dead. Investigation has commenced and the case will be charged to court soon.”

Chukwu Chimaobi, a 16-year-old student of Community Secondary School in Ihe community of Agwu Local Government Area, was also paraded by the police boss for murder.

“On 25th February, 2020 about 1:30p.m., Mbanabo Police Division received a report by the Principal of Community Secondary School, Ihe in Agwu Local Government Area of Enugu State, that a student of the school stabbed his classmate to death and took to his heels.

“The police operatives of the division rushed to the scene and evacuated the victim, Miracle Egbo (17), to the hospital, where he was confirmed dead. The suspect was later arrested, while the State Criminal Investigation and Intelligence Department (SCIID) is investigating.”

The Anti-Cult Unit of the police command arrested Charles Onoh aka Hausa (23), Chigozie Onoh aka Stone (25) and Eze Gerald aka Anything (35), all of Vikings Confraternity; and Okoro Sunday (38) over an alleged murder of a member of Black Axe Confraternity.

“Following reports that there was cult crisis at 9th Mile area of the state on March 9, 2020, which led to the killing of three persons, operatives of the Anti-Cultism Unit of the command stormed the area on March 10, 2020, joined forces with operatives of 9th Mile Police Division and were able to arrest the suspects.

“Preliminary investigations reveal that the first suspect, Charles Onoh aka Hausa, a member of the Vikings Confraternity and recently released from prison custody sometimes in March 2019, was having a procession, shooting of guns and other cult activities with his cult members during his deceased father’s wake, when they got information that one of their cult members had been killed by members of the Black Axe cult group at 9th Mile Expressway.

“They immediately took off to the location, with the second suspect, Chigozie Onoh aka Stone, where they shot dead a member of the Black Axe Cult group.

“A full-scale investigation is on to further arrest members of the cult groups involved in the clash and murder of the victims and to recover their operational weapons.”