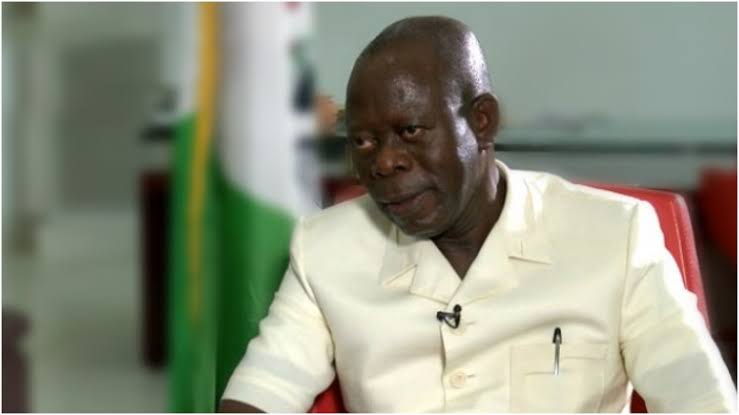 The Court of Appeal in Abuja on Monday adjourned indefinitely an appeal filed by the embattled national chairman of the All Progressives Congress (APC), Adams Oshiomhole, over his suspension.

The court’s clerk made the announcement after informing the court that the three member-panel meant to sit on the appeal was not ready.

She added that a new date would be communicated to parties in the matter.

Mr Oshiomhole was suspended on March 4, following an application filed by the deputy chairman of the party (North-East), Mustapha Salihu, and five others through their lawyer, Oluwole Afolabi, in January before Justice Danlami Senchi.

The applicant’s interlocutory injunction application challenged Mr Oshiomhole’s continued right to parade himself as the party’s national chairman after his initial suspension by his primary ward in Edo State.

The embattled chairman’s suspension came amidst a power tussle between him and his successor, the Edo State Governor, Godwin Obaseki. The tussle has created factions within the ruling party in the state and continues to threaten the party’s unity at the national level.

Some party leaders have also criticised Mr Oshiomhole’s leadership style, blaming it for the APC’s defeat in some states during the last general elections.

Hours after the suspension, the APC announced three new members of its National Working Committee, including Waziri Bulama as acting national secretary, a move condemned by some leaders of the party.

A federal court in Kano later gave a different order that Mr Oshiomhole should continue in office.

Amidst the controversy, the assistant national secretary of the party, Victor Gaidom, circulated a statement announcing a National Executive Council (NEC) meeting on March 17.

But a counter-statement issued by some top officials of the APC enjoined party members to ignore Mr Gaidom saying his action fell outside the party’s constitution and jurisdiction. The statement was jointly signed by Lanre Issa-Onilu, the party spokesperson; Babatunde Ogala, the national legal adviser; and Mr Bulama.

Mr Gaidom, however, continued to insist he was the next in line in the party hierarchy following Mr Oshiomhole’s suspension and the absence of a substantive national secretary. The party’s former national secretary is now the governor of Yobe State.

However, a court in Lagos, Thursday, ruled that a NEC meeting of the APC cannot hold except the trio of Waziri Bulama, Abiola Ajimobi, and Paul Chukwuma are in attendance. The three were the appointments announced after Mr Oshiomhole’s suspension as acting national secretary, acting deputy national chairman and acting national auditor respectively.

In the appeal documents, Mr Oshiomhole is challenging the court ruling that suspended him.

The defendants in the case include Mustapha Salihu, the deputy chairman of the party (North-East).

Mr Salihu, on March 4, hailed the High Court’s decision to suspend the party’s chairman. He accused Mr Oshiomhole of imposing his will on members of the party’s national working committee.

Another defendant is the Edo State chapter chairman of the party, Anselm Ojezua, a loyalist of Mr Obaseki.

Others are Sani Gomna, Oshawo Steven, Fani Wabulari, Princewill Ejogbarado, the Inspector General of Police, and the State Security Service.

Mr Oshiomhole was in court to witness the day’s proceedings.

On Sunday, a leader of the part and former Lagos governor, Bola Tinubu, declares support for Mr Oshiomhole, criticising those he said were pushing for his removal, to seize control of the party in preparation for the 2023 presidential elections.