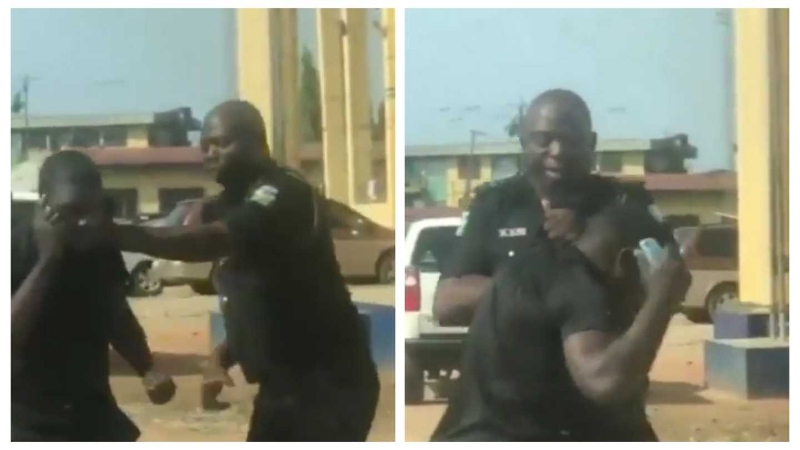 Operatives of Lagos State Police Command have arrested a police officer identified as M. Aliu for assaulting a ports worker who was picking up his friend who works with a medical equipment company in Lagos.

WITHIN NIGERIA had earlier reported that President Buhari issued a lockdown order in Lagos, Ogun state and Abuja and further stated that seaports in Lagos shall remain operational.

It was also stated that hospitals including all related medical establishments as well as organizations in health care related manufacturing and distribution were also exempted from the lockdown order.

The Nigeria Police Force (NPF) was alerted of the assault incident by Nigerian veteran rapper, Ruggedman via Twitter.

The police officer was identified as M. Aliu by Ruggedman and further revealed that he was assaulting a ports worker at Area M command, Idimu.

HAPPENING RIGHT [email protected] @PoliceNG_CRU look at your officer M. Aliu hitting an innocent ports worker at Area M command, idimu. His offence? Picking his friend while works in a MEDICAL EQUIPMENT COMPANY l, both exempted from lockdown n she has a PASS. CC @AcpIshaku

Reacting to the development, Head of the NPF Complaint Response Unit (CRU), ACP Markus Ishaku Basiran confirmed the incident and revealed that the video said the erring police officer has been arrested, detained and nowawaiting trial.

Officer detained and awaiting trial. Spoken with the parties involved and the officer in charge. Great synergy and thanks for reaching out, pls.