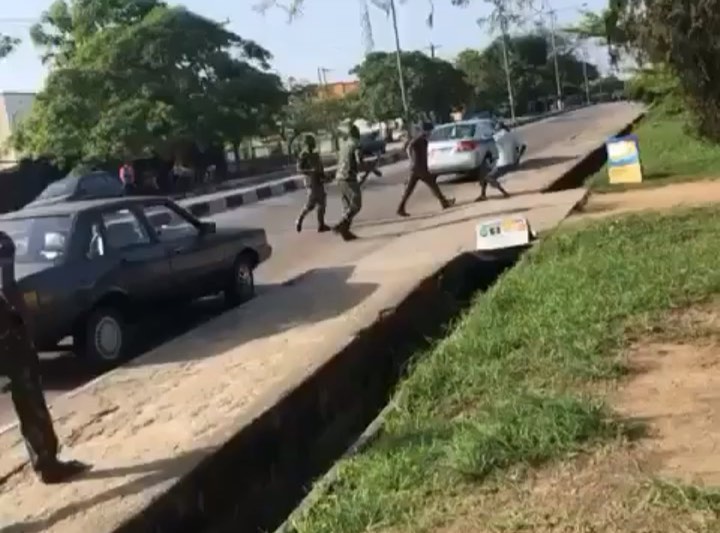 A Taxi driver was reportedly beaten to death yesterday by security operatives, for carrying passengers who were not wearing face masks in Cross River State.

An eyewitness @ayebechristopher, revealed that the incident occurred at Marian in Calabar, Cross River State’s capital.

He said the driver who was wearing a face mask when he was stopped, was beaten by security operatives till he collapsed. He was confirmed dead thereafter.

WHO said only wear Mask if you’re sick or taking care of a sick person but the Governor of CRS with his own eye service, so they’ll say he’s fighting Corona too came out and said you must wear Nose Mask else you stay indoors, (that’s actually not the problem) but why not give the Law Enforcement Agents you’re using proper orientation.

Now they’ve killed someone. Shey you’re happy now ? Is that what other States with Covid-19 cases are doing ? No confirmed case in Calabar yet and you’ve started killing people. This is really sad. The mask you even said you’ll distribute was only distributed in Government House. Na wa ooo 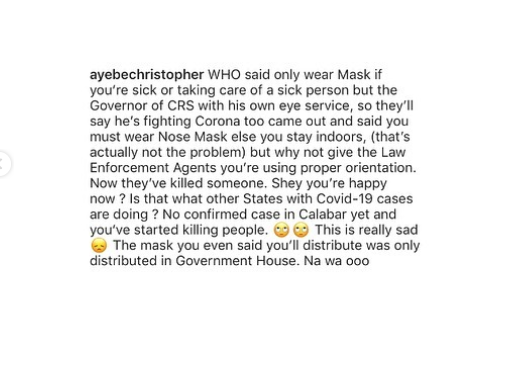 This is coming after Governor Ben Ayade issued a “no face mask, no movement” order. In a statement released by his media aide Christian Ita, residents of the state were told they would not be allowed out without a face mask starting from Friday April 3.

It read in parts;

“No citizen or resident of the state will be allowed to leave home without a face mask from Friday 3rd, April 2020.

“Failure to adhere to this directive will lead to the arrest and quarantine of the offenders for 14 days.

“The Cross River State garment factory has been mandated to produce face masks to be freely distributed to citizens and residents alike to meet with the demand.

“Those who for one reason or the other are unable to get masks from government before the new restrictions kick in, are advised to purchase theirs from shops selling the item.”