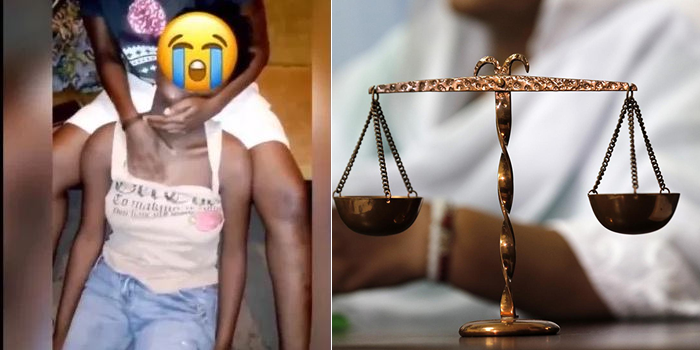 #JusticeForJennifer: Nigerians call for Justice for Jennifer, 18, who was ‘gang-raped’ by 5 Men in Kaduna

#JusticeForJennifer trends on popular microblogging app Twitter, as Nigerians seek justice for one Jennifer who was allegedly gang-raped by 5 boys in Narayi, Kaduna State.

Meanwhile, a report emerged online claiming that the suspects want to pay N30,000 for damages so that the case against them can be dropped.

A Twitter user, Uncle Shemzz @shemang_david, who made the claim, shared a video of the traumatised girl who was been comforted by her family.

Uncle Shemzz wrote saying, “This is the 18-year-old girl that was gang raped weeks back in Narayi. The rapists haven’t been charged to court and look like her folks plan to accept payments. No amount can pay for this damage. It’s OUR duty to ensure there’s #JusticeForJennifer,” he added.

This is the 18 year old girl that was gang raped weeks back in Narayi.

The rapists haven’t been charged to court and looks like her folks plan to accept payments. No amount can pay for this damage. It’s OUR duty to ensure there’s #JusticeForJennifer pic.twitter.com/bZIWuMDqXY

Since he shared the video and made the claim, thousands of supports have poured in, making #justiceforJeniffer one of the trends on Twitter.

Other Nigerians call for #justiceforjeniffer

It is never okay to rape, or support rape and rapists in m any way. It is never the victim's fault, no matter the circumstances.

Let us join hands and stand firm against this societal menace, and teach future generations that no matter what, No means No!
#justiceforjennifer pic.twitter.com/wqpdJyIkMM

A rapist is a rapist. A person. Stop making rape seem like an act that’s exclusive to animals when we’ve clearly seen that humans are very capable of it. 5 men gang raped an 18 year old woman. They are men, not animals. #justiceforjennifer https://t.co/UskKu2eGIL

Jennifer's life has been in turmoil ever since she was gang raped by 5 low lives.
I join my voice with that of other well meaning Nigerians to call for #JusticeForJennifer.
The remaining 3 culprits need to be arrested imminently & dealt with decisively
pic.twitter.com/bpKeswBxdc

Say no to Rape.
Anyone who rapes a girl/woman is an animal and should not be allowed in the society. You're a beast if it's okay with you. 💔💔💔
Say no to any sexual abuse.#JusticeForJennifer pic.twitter.com/VKxBnnWPpZ

While the outrage continues on the popular social media platform, a user identified as @Real_jaeflex claims that the Kaduna state government has taken over the case and assures that justice will be served. See tweet below:

Thanks to everyone for lending their VOICES,The Kaduna state Government has taken over the case, the two suspects in custody have been arraigned before the court and were not granted bail, the case will be mentioned on the 10th right f June 2020

Is it a crime to be a celeb? - Bobrisky to those claiming he didn’t pay the DJ at his N400M housewarming