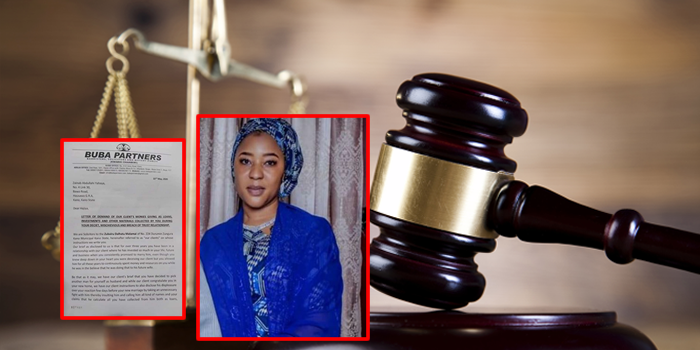 According to reports, a Nigerian man identified as Zubairu Dalhatu Malamal is currently demanding a sum of 9 million naira from his ex-girlfriend identified as Zainab Abdullahi Yahaya (who happen to be the new bride of Col Hameed Ali rtd) of 3-years who refused to marry him.

Yesterday, news of the Comptroller General of the Nigeria Customs Service (NCS), Col. Hameed Ali (Rtd) picking a new wife over the weekend hit the airwaves. Col. Hameed Ali (Rtd) over the weekend got married to a new bride, Hajiya Zainab Abdullahi in a wedding ceremony devoid of fanfare because of the ravage of the COVID-19 pandemic in the country.

However, a Twitter user identified @emmaikumeh shared the story of the embittered ex boyfriend sueing for damages after a ‘pretentious’ relationship of 3 years with Zainab, the now new bride of the the Customs boss.

The man is reportedly demanding that she refunds him every dime he spent on her during the course of their relationship, well to the tune of 9 million naira.

@emmaikumeh shared the court documents on his Twitter space. See below:

Ex-boyfriend of new wife of custom’s BOSS demands payment of 9milliom spent during their relationship through his lawyer.