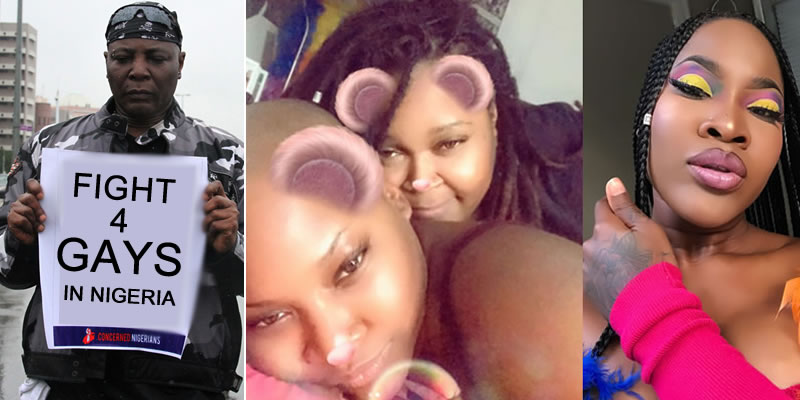 Charly Boy’s lesbian daughter, Dewy Oputa attacks him for declaring to campaign for Gays in Nigerian

You blocked me on every social platform, now you’re typing paragraphs for the gram’ – Charly Boy’s lesbian daughter, Dewy Oputa calls him out for turning into a gay rights activist .

Charly boy’s lesbian daughter, Dewy Oputa has called him out for turning into a gay rights activist despite blocking her.

According to her, she hasn’t spoken to him for months and he blocked her on every social media platform only for him to be typing ‘paragraphs for the gram’.

Charly boy in an earlier post said, ‘now I reactivate my fight in defence of the LGBT community. You know something? Openness may not completely disarm prejudice but is a good place to start. I am hoping that my support will be a show of strength to the Nigerian LGBT community’.

”I have fought for Okada men, Musicians and others, now is the time for me to fight for Gays in Nigeria” CharlyBoy

Singer and social activist, Charly Boy says he has reactivated his fight for the Lesbian, Gay, Nisexual and Transgender LGBT community in Nigeria. His renewed vigor to fight for the rights of the LGBT is coming against the backdrop of his daughter, Dewy Oputa, who recently came out as a Lesbian and also showed off her lesbian partner.

In a post shared on his IG page this morning, CharlyBoy said he has in time past fought for Okada riders, Musicians and many others and that now is the time for him to fight for the LGBT community in Nigeria. Read what he wrote below

All that I have done for over 50yrs of my life is to root for the underdogs.
I turned my back on my goldplated pedigree and wondered into the unknown.

I discovered that victory is a million times sweeter as an underdog. Oh!!!!! Yes.

My life has been one Big fight, against bad habits, poverty, hopelessness and principalities.
But I never backed down.

I battled for the rights of the Okada’s  to make a living.I battled for the rights, respect and the
big money for the Nigerian Musician, spent weeks in the police cell, as a pman president.
Today, thank God they have a better life. Now am the President of Frustrated Nigerians.
I am battling with my comrades to stop the senseless killings of Nigerians.
The oppression of Inocent Nigerians and the weaponisation of hunger.

Many battles too many to mention. I have been beaten black and blue by
the military, police, security agents, been teargassed, shot at, stoned and most time misunderstood even by the people I fight for.

No big deal because I never back down. Now I reactivate my fight in defence of the LGBT community.? You know something? Openness may not completely disarm prejudice
but is a good place to start. I am hoping that my support will be a show of strength to the Nigerian LGBT ?community. Because seriously speaking

To each his own.

“Curses will befall men who wash their women panties in the name of love”, says actress Maame Dokono