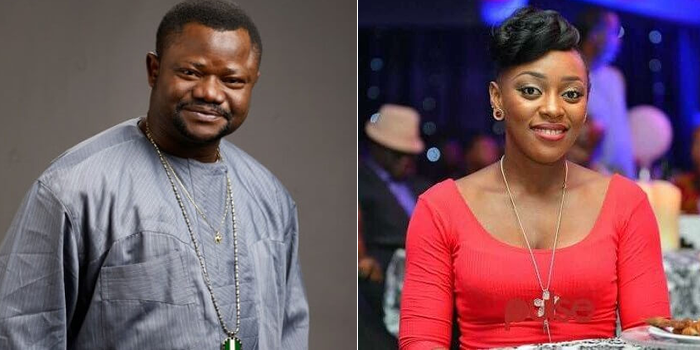 Nollywood Actress Sylvia Oluchi has accused veteran movie director, Lancelot Imasuen, of sexually assaulting her, during a film shoot in 2008.

Sylvia Oluchi called Imasuen out in a popular industry group chat known as ‘Filmic’. While accusing him of soft-pedalling the issue of sexual assault in the industry, Slyvia revealed how the revered director groped her during a film shoot.

However, the popular movie director, Lancelot Imasuen has reacted to the sexual assault allegation made against him by the actress.

He said; “It is still a private matter so I am not in a position to make a statement. The group chat where the accusation was made is a private one and the group’s admins have set up a committee to investigate the allegation.”

“So, while I am surprised as anybody else-it is from 13 years ago, I have been advised to be quiet. It is an industry thing for now and cannot be made public.”

US 2020: Donald Trump Reacts As Nigerians Hold Rally In His Support

“When we were filming Bent Arrows back in 2008 in Abuja. You told me to come to your room in the hotel after shoot at night (we were all camped in the same hotel). You made some moves, when I refused, you physically pinned me to the bed and shoved your tongue down my mouth while squeezing my boobs.”

She also stated that her tears forced the veteran director to change his mind.

“My tears forced him to change his mind. I am not the only one as others too have suffered similar fate.”

Here are the leak chat below: