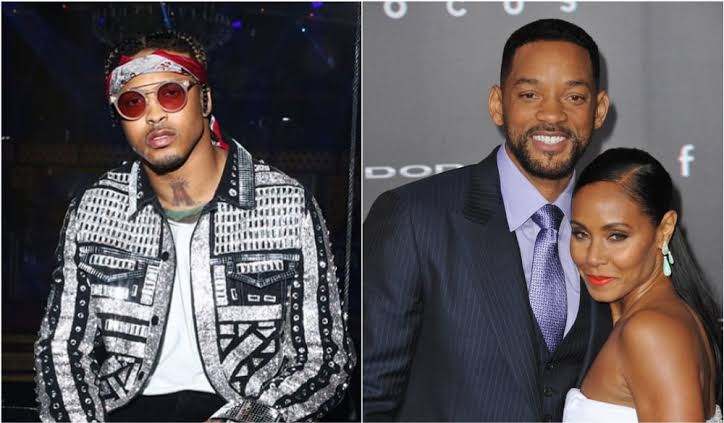 Will Smith’s wife, Jada Pinkett admits she had an affair with singer, August

Will Smith’s wife, Jada Pinkett has reacted to the claims made by singer, August, that he asked for Will’s blessing to date her.

The actress, however, did not deny being a relationship with the 23-year-old singer, she only stated that she needed no one’s permission to do that.

Recall that August Alsina had said in an interview some weeks back, that he dated Will Smith’s wife, Jada Pinkett, after receiving the green light from Will Smith.

Jada reiterated the fact that the couple met August through their son, Jaden and the singer, who would have been 23 at the time, was ‘really sick’ then.

‘And it all started with him just needing some help, me wanting to help his health, his mental state,’ she said.

“The outpouring for him from our family was initially about his health. ‘We found all those different resources to help pull him through and from there you and I were going through a very difficult time.

Will chipped in, ‘I was done with you.’ Jada explained they decided to separate for a ‘period of time’.

And then what did you do, Jada?’ Will asked. “As time went on, I got into a different type of entanglement with August,” Jada explained.

Responding to August’s claim that Will Smith gave her ‘permission’ to have an affair, the mother-of-two went on to say that that is not true.

“The only person that can give permission in that circumstance is myself,” she explained.

“But what August was probably trying to communicate because I could see how he could see it as permission because we were separated amicably, and I think he wanted to make it clear he’s not a homewrecker because he’s not.

Will then ask Jada to illuminate what she meant by ‘entanglement’ she responded, ‘It was a relationship, absolutely.’

Jada continued, “I was in a lot of pain, and I was very broken. In the process of that relationship, I definitely realized that you can’t find happiness outside yourself.

‘I just wanted to feel good, It had been so long since I felt good… and it felt really good to just help heal somebody,’ she added.

The actor himself, Will Smith, earlier came out to refute the claims made by august – That he, Will gave him his blessings to date his wife.

She said she and Will tried “everything we could to get away from each other only to realize that wasn’t possible.

Furthermore, Pinkett Smith revealed that her relationship with Alsina ended, the Smiths reunited, and she said she has not spoken to August in years.

In addition to that, Pinkett said she and her husband have now reached a place of “unconditional love.”

On his part, the bad boys actor, Will Smith said he was not sure as to whether he would ever speak to Pinkett Smith again during their rough times, but he reminded her of their commitment.

“I told you the first year we were married, that I could love you through anything,” Will Smith said.

The couple bumped fists as they jokingly recited their rendition of his “Bad Boys” movie motto: “We ride together, we die together. Bad marriage for life.”