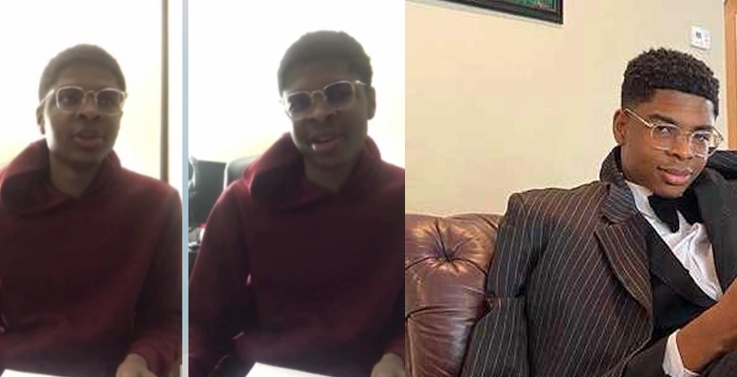 After being accused him of harassment by a woman and then committing suicide, in the US on Thursday, July 16, a video showing Izuchukwu Madubueze, 23, reading a suicide note before shooting himself dead has been shared online.

According to the Pinellas County Sheriff’s Office in Florida, United States, the Nigerian entrepreneur died by self-inflicted gunshot wound

“Izuchukwu Madubueze was the victim of what appears to be a self-inflicted gunshot wound on July 16, 2020. The case is open and active and no further information will be provided at this time,” said Deputy Travis Sibley, a spokesman for the office.

Before taking his life, Izu recorded himself reading his suicide note. The video has now been shared online.

In the video, he addressed the harassment allegation, declared his love for his family, and said some words to his accuser.

“I feel like it’ll be awesome to say some last words before I leave,” Izu began in the video.

He added: “In the last couple of weeks, I have seen the tweets. I have heard from several people, I’ve also seen some people who I expected a lot more from subtweeting me and I wasn’t ever given a fair chance to clear my name or explain my side of the story or verify whether any of the allegations against me were true or not.

“To my family, first of all, I apologize for bringing disgrace to your name. I love you all unconditionally from the bottom of my heart.”

“To my mum, I pray you stay strong, ” he said with a shaky voice.

“To my little bro, Ekene, I love you man. I wish we hadn’t grown super distant.

“To my sister, I love you so much sis. You have great things in store for you. You’re gonna be a very very great person.”

He then addressed his accusers, saying: “To Ify and Duby I wronged and who I… who said I groped them, which hurts a lot.

Izu was referring to the list posted on Twitter where a number of men were named as people accused of sexual assault, harassment, or rape. Izu’s name was listed and he was accused of harassment.

The list was posted by a user named Nani.

Izu continued: “I mean, like I told you Nani, I can’t shoot the messenger. but your attitude not to work towards clearing up accusations was piss-poor. You denied me the opportunity to clear my name and you refused to tell me what exactly I did that was harassment, even after I provided proof that I didn’t harass this person….”

After recording the suicide note, Izu also scheduled a short note that was posted on Twitter on July 17, one day after his death.

Nani, the lady who accused him of harassing a woman has been receiving heat on Twitter following Izu’s death.

Watch Izu reading the full suicide note in the 6-minute video below.

JUST IN: INEC may extend primaries' deadline by one week

Udom to PDP delegates: I want to restore economic boom in Nigeria