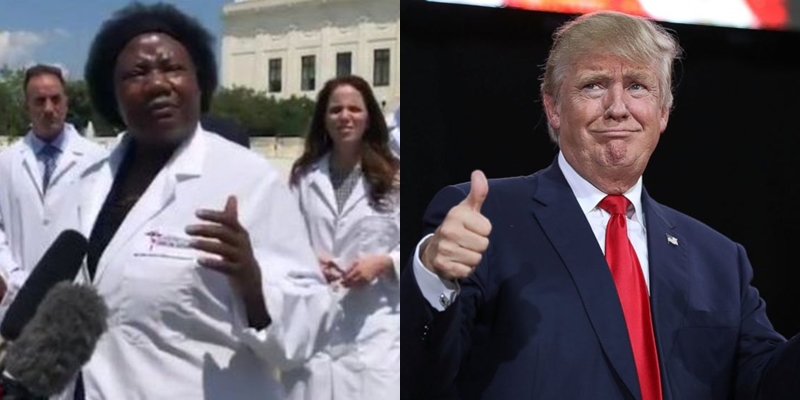 On Tuesday, President Donald Trump defended the viral video of Dr. Stella Immanuel and again approved the use of a disproved anti-malaria drug, hydroxychloroquine as a treatment for COVID-19.

In a White House briefing, the US president defended his decision to promote a viral video of a group of doctors promoting the use of hydroxychloroquine, despite his own administration withdrawing emergency authorisation for its use against the coronavirus.

Despite scientific studies showing hydroxychloroquine can do more harm than good when used to treat coronavirus symptoms, Trump, who first touted the drug as a coronavirus cure in March, said he believed it worked “in the early stages.”

Due to the risks of serious side effects such as heart rhythm problems, the U.S. Food and Drug Administration revoked its emergency-use authorisation of the drug for COVID-19.

The World Health Organization (WHO) says there is currently “no proof” the anti-malaria drug is effective as a coronavirus treatment nor that it can prevent the virus.

In the video, Dr. Stella Immanuel, a physician from Houston, promotes hydroxychloroquine as a cure for coronavirus. She claims to have successfully treated 350 people.

“You don’t need masks, there is a cure,” Immanuel says in the video.

But she is seen regularly wearing masks in videos posted to her Facebook page, where she preaches during religious events.

“I thought her voice was an important voice, but I know nothing about her,” Trump said about Immanuel, sidestepping questions about her history of dubious medical claims.

On Tuesday, Trump also backed away from criticism of Anthony Fauci, an infectious disease expert who is on the White House coronavirus task force, who he had criticised in Tweets a day earlier.

“I get along with him very well,” Trump said.

In the run-up to the November presidential election he also appeared envious of his widespread approval rating.

“He’s got a very good approval rating, and I like that,” Trump said, adding that Fauci and White House coronavirus task force coordinator Dr. Deborah Birx work for him, “yet they’re highly thought of but nobody likes me.”

More than four million people in the US have been infected by COVID-19 and the death toll is nearing 150,000, according to a tally by Johns Hopkins University.