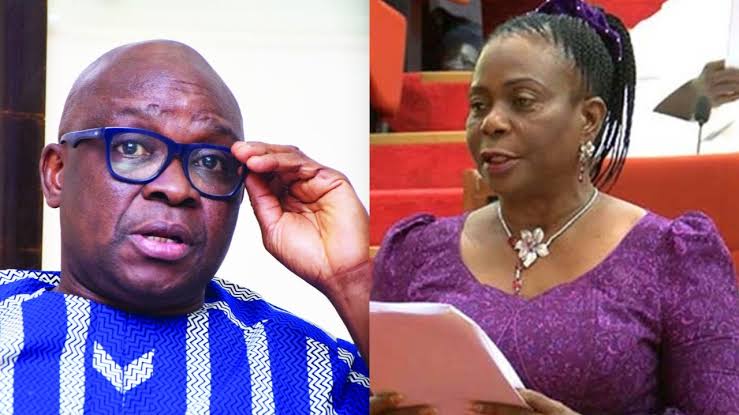 Former Senate Minority Leader Biodun Olujimi has denied speculations she was planning to dump the People’s Democratic Party (PDP) for the All Progressive Congress (APC).

Olujimi, who described the alleged plan as figment of imagination of mischief makers, said she remains a committed member of the PDP and would never dump the opposition party under any guise.

Addressing journalists in Ado-Ekiti on Sunday, the PDP chieftain alleged the speculation was handiwork of former Governor Ayodele Fayose, who she said is bent on smearing her ‘soaring political relevance’ in Ekiti PDP and at the national level.

The lawmaker representing Ekiti South Senatorial District said Fayose and his cohorts had resorted to campaign of calumny because she was opposed to his tyrannical and dictatorial style in the management of Ekiti PDP.

She added Fayose was trying to take advantage of her gender to sideline her from the management team of the party, even when she has given her best to the growth and service of both the party and the state.

Olujimi, who dismissed the claim that she was trying to hijack Ekiti PDP from the ex-governor, said she was prevailed upon by some concerned leaders of the party across the 16 Council areas of the state to provide leadership that was lacking in the state chapter.

She said: “I believe it is what we do that will make people believe in us. What happened is that some people came together and said they want a new leadership.

“I didn’t compel anyone. They came and said they needed a breath of fresh air, a new beginning and inclusiveness and then we started a movement, which gathered so much momentum to such an extent that they believe that we are eroding the ground upon which they, the former governor’s men, stand.

“I wonder why Fayose who was governor for eight years would be struggling to wrestling powers with ordinary Senator.

“The bottom line is that if you have done well, you won’t need to wrestle at all. Fayose that I worked with and I had great respect for? How did he lose it? He needs to answer that”.

The PDP chieftain noted the party belongs to every member and thus would not leave it for the ex-governor and his ‘disillusioned group of renegades’ who had no stake in the party.

She added her interest had always been to strengthen the party from the states to ward levels and wrestle power from APC in 2022 through collegiate leadership where every member would be participating in the decision making process.

“For me, contrary to insinuation, I am wholly PDP through and through. They tried to brand me APC because I worked well with people, especially Mrs. Fayemi.

“We have met at different fora including the UN. I see her as a leading light on gender issues but I differ with her when it comes to issues of politics,” she stressed.

On the allegation she was scheming for the 2022 governorship, Olujimi said there was nothing that precludes her from participating in the governorship election of her state.

“Nothing at all. I have paid my dues and done what I am supposed to do in Ekiti.

“I am eminently qualified to participate. Don’t forget that I participated in the 2018 governorship election,” she said.