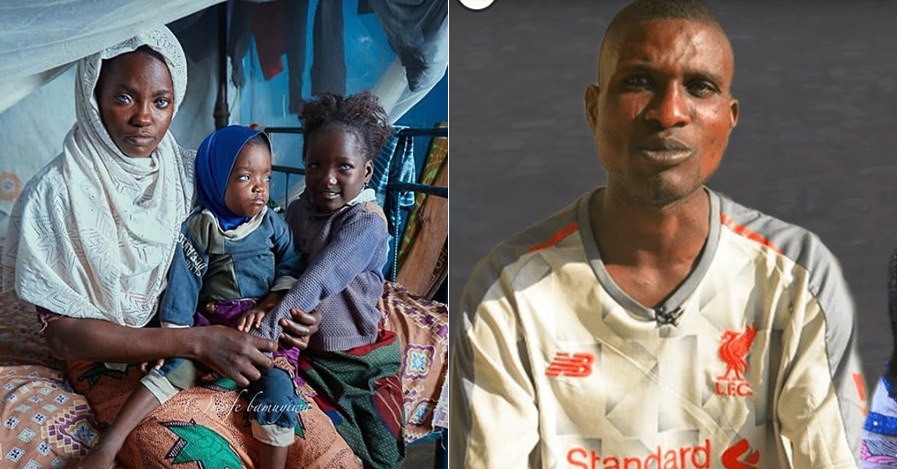 Mr Abdul-Wasiu Omo-Dada, the Nigerian man who was accused by his wife of abandoning her and their daughters because of their blue eyes, has finally spoken.

According to Dada in a recent interview with The PUNCH, he never abandoned his family as insinuated by his wife and people who had supported her.

Dada who is a vulcanizer by profession told news correspondent that he had married his wife because of her special blue eyes, contrary to the rumoured reports. He alleged that his wife was not contented with all that he does in the house.

Dada lamented that photos of his wife and children were posted on Facebook to lie against him, to seek for public trust and as well beg for alms. He further explained that families of his wife have once sent him a delegate to warn him that Risikat must not go hungry.

Speaking during the interview; Dada said; “It was because of her eyes that I fell in love with her and married her.
Her actions towards me, such as waywardness, and telling me that I’m not being good to her, those were the issues that caused our fight.”

“The things that I have been doing that she denied, I have been providing for her and the children even to the knowledge of her parents but they were not satisfied, until they posted pictures of my children on Facebook, using them to beg for alms.

“They claimed that I wasn’t providing for my family.”

Speaking in the same interview with newsmen, Risikat faulted her husband, insisting that he had left her and the children because of their look which only started with her in their linage.

She said, “I heard that my husband said he left me because I was not content and not because of my eyes.”

“The fact of the matter is, he left because of my eyes, When I was still with him and gave birth to our first child, she had my eyes and when the second child had the same eyes, I saw his family members telling him that they didn’t like our eyes and he started behaving the way he did; he stopped sleeping at home and we had no food, nothing.”

Risikat’s husband, however, insisted that he married her because of the blue eyes, he said “We became husband and wife. Without much ado, our relationship progressed and it was a good one, we would even wear outfits made from the same fabrics.”

“We have children, when we gave birth to the first baby, I paid the sum of N35,000 and the fees were not up to that, considering she gave birth at home. I was told that those who delivered her of the baby demanded N35,0100 and I paid.”

“I accepted it was what God had destined I would pay. She came back from a trip to her mother’s place, where she had gone to visit her. she went with my child.”

“She was handed over to the man, who led the delegation from my family and we were told that she must not go hungry,”

“The man wondered how she {Risikat} was going to go hungry, given that I have a job and have plans.”

“Let me just say what they have expected didn’t happen,” he said.

Watch the video below to hear the full story;