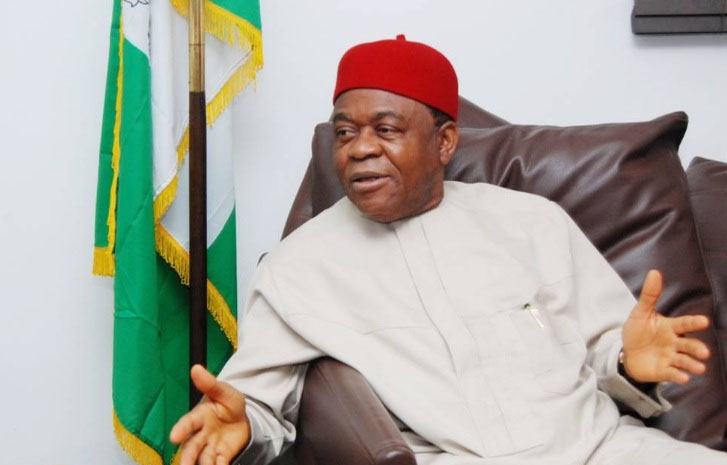 Former governor of Abia state and senator representing Abia Central, Theodore Orji, has denied the ownership of buildings marked for investigation by the Economic and Financial Crimes Commission (EFFC) in Umuahia, the state capital.

Orji, in a statement issued on Tuesday, August 11, by his media adviser, Chief Eddie Onuzuruike, in Abuja, however accused some persons of instigating the EFCC to go after him after they failed to extort him.

He noted that the real owners of the houses in question have been revealed by the Abia State government, wondering why he was being linked with the same properties.

The statement reads: “Our attention has been drawn to a fake news report in the media over the weekend initiated by one Comrade Akabueze Onuigbo, claiming to be the Publicity Secretary of a faceless group by the name Concerned Abians for Justice (CAJ).

“According to the syndicated report, Akabueze made a purported call to EFCC based on a previous call by an APGA chieftain, calling for a probe of Senator T.A. Orji and his son over the purported ownership of some buildings marked by the Economic and Financial Crimes Commission (EFFC) in Abia State.

“The office of the Distinguished Senator T.A. Orji is using this medium to alert the general public that the individuals masquerading as groups are of no consequence but only out to cause disaffection and hatred not too far from committing the offences of hate speech and blackmail having failed to extort money from the Senator.

“Concerning the EFCC and the markings in Umuahia, the Abia State Commissioner for Justice/Attorney-General took time in July to explain to the public that the properties marked belonged to agencies and developers who are into multiple engagements with the Abia State Government.

“For the avoidance of doubt, most of the said agencies had in different publications warned the EFCC to steer clear of the buildings and apologise.

“For the umpteenth time, Senator T.A. is not the owner of the buildings in question, hence the cheap blackmail should stop.”