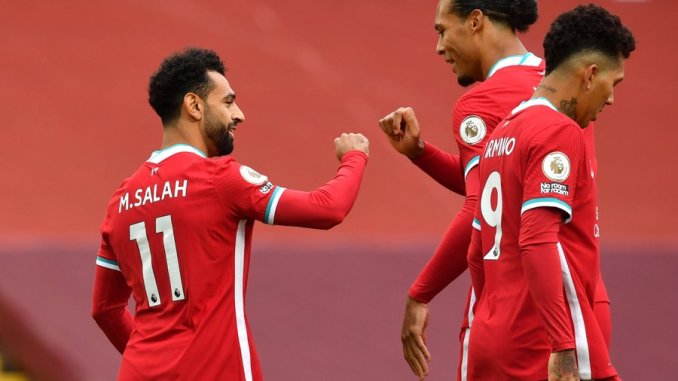 Liverpool won a seven-goal thriller late on as Mohamed Salah’s hat-trick saw off a spirited Leeds side 4-3.

The Premier League champions were pushed all the way by the newly promoted outfit who stuck to their principles from minute one.

Salah’s opener from the penalty spot was quickly cancelled out by Jack Harrison whose excellent touch allowed him to riffle past Alisson.

A bullet header from Virgil van Dijk reestablished their lead before the Dutchman’s mistake allowed Patrick Bamford to slot home.

Salah then smashed home Liverpool’s third on 33 minutes to send the hosts in 3-2 up at half-time.

But Mateusz Klich volleyed home from close range just after the hour and looked to have grabbed a point for the visitors.

But Fabinho was fouled with three minutes left that allowed Salah a chance to slot home in front of an empty Kop for the win.