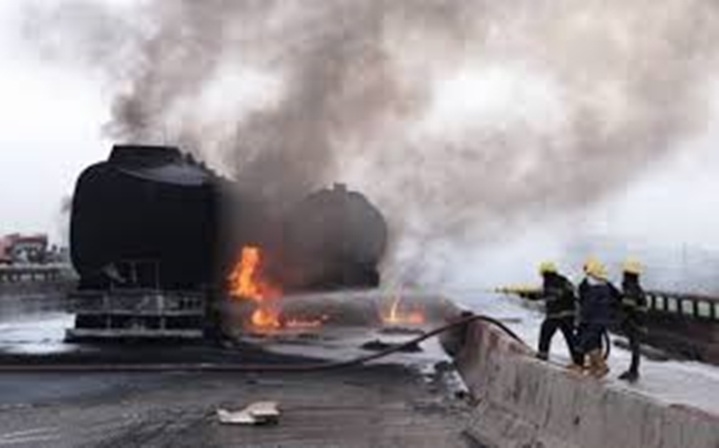 On Saturday night, eight people were burnt to death in a lone accident involving a Mazda bus on the Lagos-Ibadan expressway.

The Sector Commander of the Federal Road Safety Corps (FRSC), Mr Ahmed Umar, stated this to NAN on Sunday in Abeokuta.

Umar said that the accident, which occurred at about 8:45 pm near Saapade Bridge, was caused by a tyre burst.

According to him, it resulted in the bus somersaulting and bursting into flames.

The sector commander added that 11 people were involved in the accident made up of three male adults, one female adult, one child and six unidentified persons.

“The suspected cause of the lone accident involving the Mazda bus marked AAA 249 VX was tyre burst which led to a loss of control before the crash and bursting into flames immediately,” he said.

He said that FRSC operatives contacted the Sagamu Fire Service immediately for a joint rescue
operation.

Umar said that three injured victims were taken to Idera Hospital, Sagamu, for medical attention while the Health Department of Remo North Local Government Area was contacted on the burnt victims.

He advised motorists to drive cautiously, obey traffic rules and regulations and ensure that their tyres were in good condition.