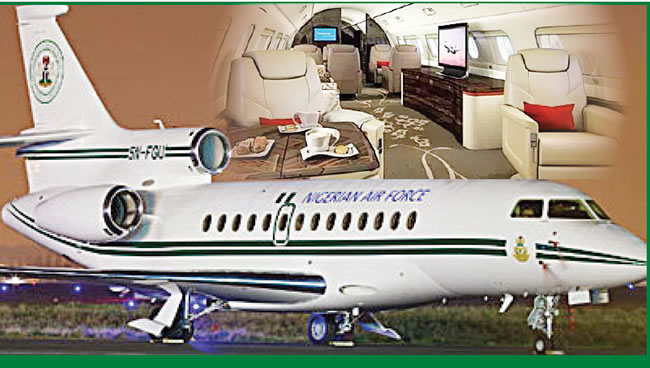 One of the aircrafts in the Presidential Fleet, Hawker 4000, with the registration number 5N-FGX/: RC 066, has been advertised for sale.

The Federal Government, in a paid newspaper advertorial in one of the national dailies, on Wednesday announced the plans to have the aircraft sold out to ready buyers.

The aircraft, one of the 10 in the fleet as at the time President Muhmmadu Buhari took over office in 2015, according to available details on the brand, was purchased in 2011 at around $22.91 million .

The aircraft, with capacity for nine passengers, is said to be the third that would be going out on sale since Buhari ordered the fleet be depleted through sales, citing austerity as reason.

The advertorial advised interested buyers to submit their closed bids to the Chairman, Committee for Sale of Aircraft, Office of the National Security Adviser, care of Special Services Office, Office of the Secretary to the Government of the Federation.

“Please note that all bids must be submitted within one week of this publication. Background check is required as a pre-qualification for the bid. Prospective bidders who want to inspect the aircraft will be granted access within one week from this advertisement”, the advertorial read in part.

When reached for reactions and further details, Senior Special Assistant to the President on Media and Publicity, Mallam Garba Shehu, said he had no further details beyond what is available in the advertorial.

“It’s there. I don’t have more information than what is in the advert. Thank you”, Shehu said.