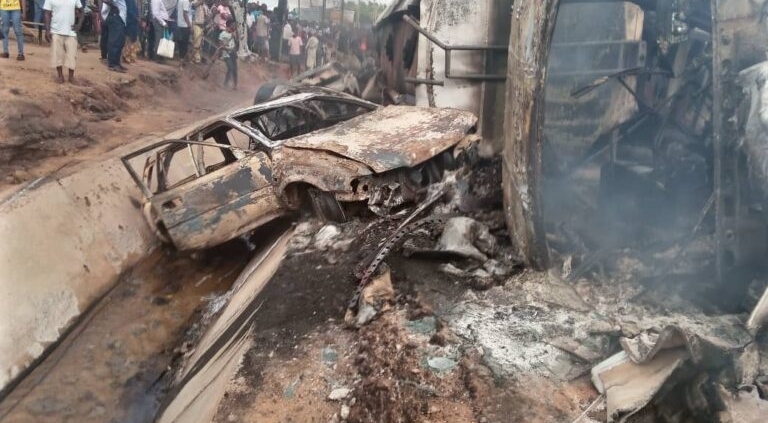 Following the tragic tanker explosion in Felele, along the Lokoja-Abuja highway that took scores of lives on Wednesday,September 23, the Kogi State government has declared a two-day mourning period in memory of those that died in the horrific accident.

WITHIN NIGERIA had reported that no fewer than 25 persons, including five students of the state-owned polytechnic, three nursery school pupils and passersby were burnt beyond recognition in the resulting explosion from an auto crash.

The crash, which was said to have been caused by brake failure in the fuel- laden tanker involved five cars, two motorcycles and three tricycles, all of which went up in flames in the ensuing inferno.

Kogi government in a statement by the Commissioner for Information and Communications, Kingsley Fanwo, said full investigations will be carried out to determine the “causes of the painful incident.”

It called on the relevant Federal Government agencies to provide relief materials to support what the State Government shall be providing to the relatives of the victims.

Governor Yahaya Bello had also called on Federal Government to quickly repair failed portions of its roads strewn across the state, to curb incessant accidents.

The Governor made the request when he paid a visit to the Minister of Works and Housing, Babatunde Fashola, in Abuja on Wednesday.

Bello was quoted to have said that the deplorable state of federal roads in the state has led to many accidents.

The statement reads: “The government of Kogi State has declared a two-day state mourning in honor of the victims of the Felele tanker accident on Wednesday 23rd September, 2020.

“The governor and the government of Kogi State are saddened by the unfortunate incident that claimed many lives in the early hours (of Wednesday).

“The primary responsibility of government is to ensure the safety and well-being of the Kogi people. As a result of the importance placed on the lives of our people, government has declared a two-day state mourning to honor the departed souls.

“In this time of grief, we urge the people to be deep in sober reflection and stand together for one another to pull out of the agonizing loss.

“Government wishes to reiterate her call on road users to act responsibly in order to avert unfortunate situations that simple care and caution could have averted.

“Full investigations will also be carried out to determine the causes of the painful incident.

“The Kogi State government wishes to assure families that lost loved ones and those whose houses were affected of support at this trying moment. We also call on relevant Federal Government agencies to provide relief materials to support what the state government shall be providing.

“Our hearts are with the affected families. May the souls of the departed rest in peace.”