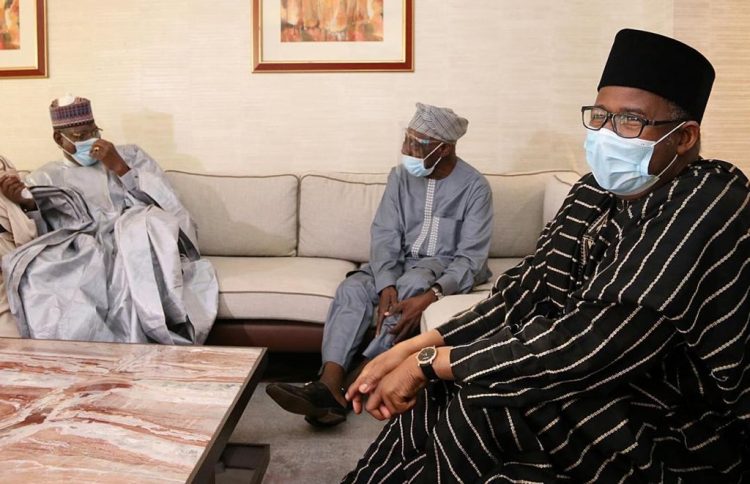 Leadership of the Peoples Democratic Party, PDP, has visited former Presidents Olusegun Obasanjo and Dr. Goodluck Jonathan to solicit their support to reclaim the presidency in 2023.

The delegation was set up by the National Working Committee of the party to visit founding fathers of the PDP to seek their support for 2023.

Mohammed and other members of the committee, which include former Jigawa State governor, Sule Lamido and his Niger State counterpart, Babangida Aliyu, met separately with Obasanjo and former Senate President, David Mark, in Abuja on Sunday.

The meeting with Babangida was held in Minna, the Niger State capital on Saturday.

Confirming the meetings, Governor Mohammed, in a series of tweets on his verified Twitter handle on Sunday said, “Today, I led a delegation of @officialPDPNig2019 General Election Review on an advocacy visit to meet with former President, Olusegun Obasanjo, GCFR.”

According to him, “the visit to former President Olusegun Obasanjo, GCFR is to intimate him on the activities of the committee and to seek his input and suggestions towards achieving our collective goal.”

Mohammed in another tweet, posted a picture of the committee with Jonathan and wrote “With a delegation from the PDP 2019 General Election Review Committee—on an advocacy visit to former President, @GEJonathan, GCFR, GCON.”