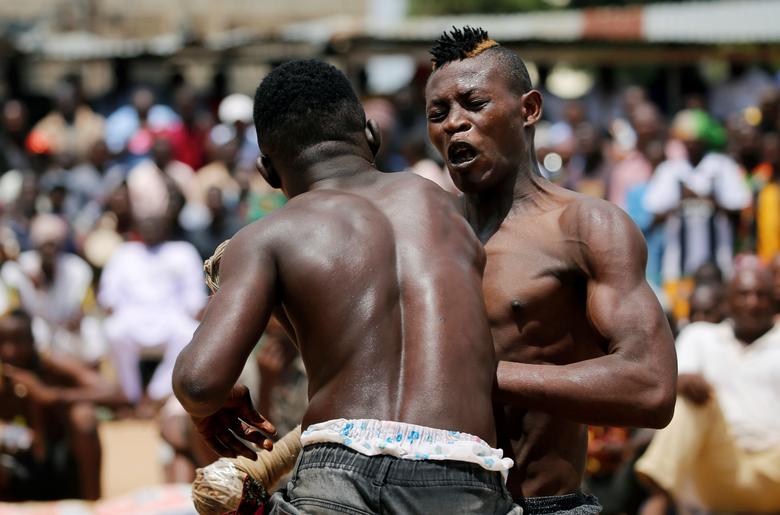 Why is Dambe martial art so popular in Nigeria? Its rules and history

Nigeria cannot boast a good standard of living. It is difficult to find decent work in the country, so for many Nigerians, the fight for money becomes the only way to feed their family. Winners of battles according to Dambe rules get good money up to $500, and in case of the most spectacular knockdown, a fighter can get a bigger reward from a rich sponsor.

At one time in northern Nigeria, the Hausa tribe formed a caste of butchers, only they were allowed to slaughter animals and flay carcasses. During the harvest, the butchers traveled through the villages and had fun, arranging demonstrative fights. They entertained the public by summoning the local strongmen to the fights. After the fights, the fighters would kill the local cattle to prepare a treat for the grateful audience. These competitions were a good survival school for future warriors and hunters. Now any fighter can take part in battles, regardless of his belonging to this or that clan, the main thing is to be in good physical shape.

Dambe is quite a spectacular fight, and people are interested in it far beyond Nigeria. It is quite possible that soon it will be of interest for betters. They will be able to download 1xbet app on the 1xbet-nigeria.com portal, where anyone can find the most interesting events in the world of sports have long been told about. This application can be used at any time while on the road or sitting at home. The main thing is to have the internet, and the rest is easy to understand.

In Dambe’s rules, too, everything is simple; there, the rivals fight with one hand for three rounds with no time limit. Kicks are also allowed, and when one of the fighters touches the ground with his knee or hand, the round ends. Before the fight begins, each opponent wraps their one fist with a cloth and then a rope. Interestingly, the rules forbid the use of amulets in combat, but the fighters still wrap their cherished talismans in ropes, swallow them or stick them in their trousers. They may even intentionally cut the skin to place the amulets there. This is how they show that they believe in higher powers, which will certainly help them win.

What is the Impact of COVID-19 on Travel Marketing Landscape?