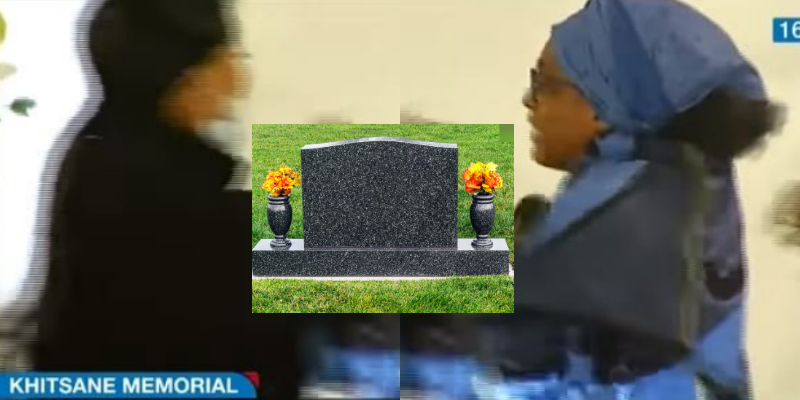 Late South African tombstone maker, Lebogang Khitsane’s sister Semati Moedi has caused chaos at his funeral after she accused his wife of cheating on him.

Khitsane reportedly died of renal failure on Thursday. The deceased is known for his amazing collections of tombstone designs on prominent figures including Nelson Mandela, the country’s late president and anti-apartheid hero.

Following his demise, a memorial service was held in his honour on Sunday.

The televised service was going according to plan until it was Moedi’s turn to pay tribute to her late brother.

In her remark, she accused Khitsane’s wife of infidelity, claiming she brought other men into their bedroom while the deceased was battling the illness that eventually killed him.

“Khitsane was in pain…his wife brought her men into their house,” she could be heard saying.

Moedi had barely spoken for long when her brother’s wife, apparently rankled by the allegations, threw water bottles at her after which she headed to the podium.

She, thereafter, attempted to wrestle the microphone from Moedi to prevent her from speaking further.

The duo’s theatrics had forced the ceremony to a halt, with the two women challenging themselves for a further fight.

It is believed that Khitsane will be buried on Tuesday morning.