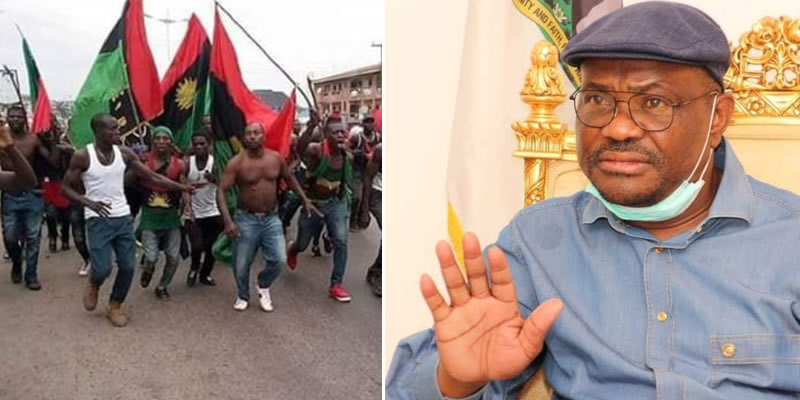 Governor Nyesom Wike on Wednesday signed an executive order reinforcing the ban on the proscribed Indigenous Peoples of Biafra’s activities.

The Governor said while Rivers remained the home to all tribes and ethnic nationalities, it was “opposed to the presence and activities of the legally proscribed and anarchic IPOB and whatever it stands for in Rivers”.

Wike, in a statewide broadcast, said the government acknowledged the enormous contributions of non-indigenes to the political, social and economic development of the state but would neither accept nor allow any individual or group from within and outside to violate the peace, endanger lives and property under any guise in the State.

He said: “And so, let it be understood that we have nothing against all or any specific tribe and will continue to live in peace with people of all other tribal extractions residing or doing business in Rivers State.

“But we have everything against the presence and activities of the legally proscribed and anarchic Indigenous People of Biafra (IPOB) and whatever that group stands for in Rivers State.

“This is clearly terrorist group which existence, creed, mission and activities are strongly denounced even by the Government and peoples of South-Eastern States of the country.

“I have therefore signed the executive order to reinforce the total ban on IPOB and its activities in Rivers State or any part thereof and nothing will stop us from enforcing this ban in its entirety”.

The Governor, in a statement by his Special Assistant, Media, Kelvin Ebiri, also directed security agencies and the chairmen of local government areas to fish out and resolutely deal with any member of IPOB found in any community in line with the executive order and other legal instruments.

Wike lifted the existing curfew on Mile 1, Mile 2, Iloabuchi, Emenike and Ikokwu areas of Port Harcourt as well as Rumukurushi in Obio/Akpor Local Government Area of the State.

Wike directed the Rivers State Civil Service Commission to take immediate steps to employ 5,000 youths into teaching and other career positions in the State’s Civil Service as an immediate measure to reduce the level of youth unemployment.

The Governor said he would set up a task force to enforce the ban on illegal street trading adding that in the interim, he had approved the ban on the operations of tricycles (popularly known as “Keke NAPEP”) on all major roads in Port Harcourt and Obio/Akpor Local Government Areas.