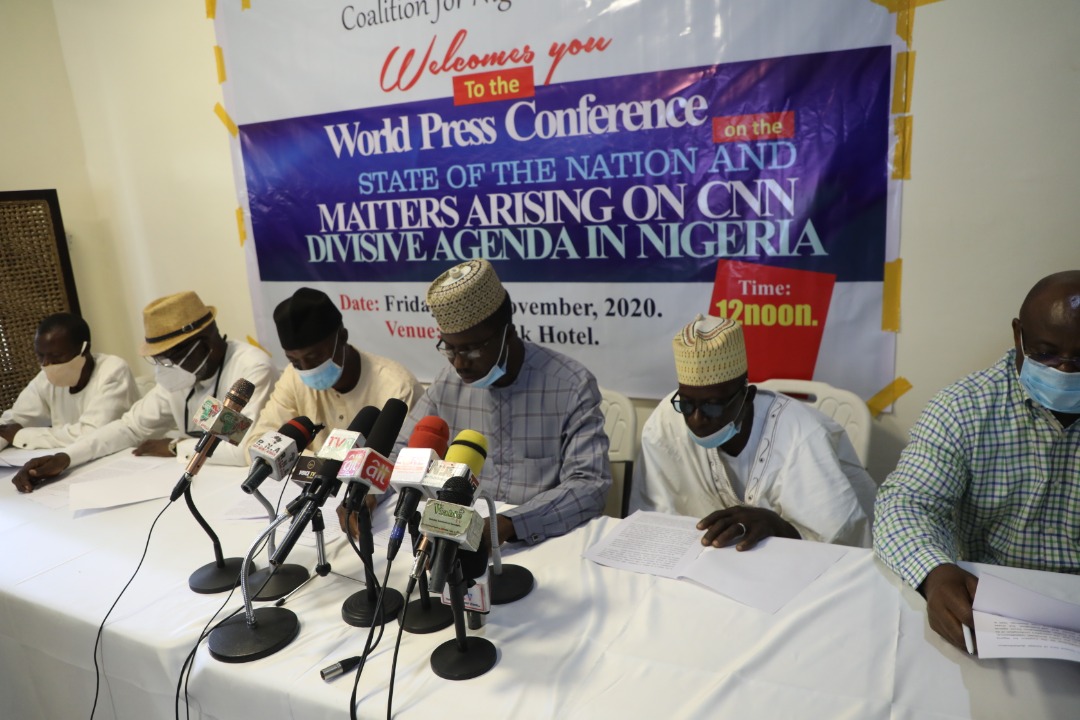 Following its controversial report on the Lekki toll gate shooting in Lagos on October 20, Cable News Network (CNN) has been branded as the newest face of foreign destabilisation in Nigeria

According to the Coalition for Nigeria Movement (CNM), the American-based news television channsl  has elevated the agenda of the divisive and destructive forces tirelessly working in conspiracy with foreign forces against the country.

Comrade Samuel Daluba speaking at a press conference, on Friday, in Abuja said the group is not surprised as it previously forecasted that some forces are in connivance with a few wealthy and disgruntled elements in Nigeria to destabilise the country.

Daluba noted that the disparity in the casualty figure clearly shows that CNN is a hired media mercenaries after a hatchet job.

He wondered why nothing was mentioned about the killings of security agents, civilians and the reckless destruction/looting of private and public properties of Nigerians by the #EndSARS protesters.

The coalition, however, warned CNN to steer clear of Nigeria, adding that the nation is a forbidden land to practice their trade.

It gives leaders and members of the Coalition for Nigeria Movement (CNM) immense pleasure to welcome members of the media to this press briefing. Let us admit ab initio that the mandate of building Nigeria is a divine order given to every Nigerian from birth. Therefore, we appreciate your individual and collective roles in support of this sacred obligation these years.

We are reluctant to remind Nigerians about the gores and bloodbath, which characterized the #EndSARS protests especially, in the Southern part of the country. But it is expedient to speak out loudly, against the sponsors of this bloodbath and carnages against their own country and the foreign forces, contracted to further execute Plan “B” which have continued to promote the irrationally destructive and evil agenda of the dismemberment of Nigeria by disparate means.

CNM is inconsolably saddened with the Cable News Network (CNN), the American-based and globally recognized cable network’s latest justification of itself as a shameful betrayal of its professionalism in the report in its edition of November 18th, 2020 on the so-called investigation of the Lekki Toll Gate shootings. The medium expanded the gamut of its influenced propaganda, inflammatory and satanic motives as always serviced by the enemies of Nigeria, hellbent on triggering massive public crises, anarchy and veiled subversion of national security to discredit President Muhammadu Buhari.

By the biased, crooked, hateful and predetermined outcomes of the CNN’s report on Lekki Toll Gate shootings, it undermined every other patriotic interest in Nigeria, but excitedly replicated condemned old tales and elevated the agenda of the divisive and destructive forces tirelessly working in conspiracy with foreign forces against the country.

We are dismayed and thoroughly embarrassed that CNN would condescend to stage out in such an undignified aura and unprofessional manner to run errands for disgruntled elements in the country. CNM wishes to intimate CNN that its narratives on the Lekki Toll Gate shootings in the report is misplaced, misleading and exposes the medium as contracted media mercenaries, which was doggedly determined to deliver on the assignment, but were frustrated by the paucity of facts and the desperation to twist reality has stained their image horribly.

Many Nigerians are genuinely shocked at CNN’s senseless and absurd quest to reinvent the sacred facts concerning the Lekki Toll Gate incidence. It is targeted to freshly inflame passions of anger and violence in Nigerians, through the falsified and unconvincing claims that soldiers of the Nigerian Army fired live bullets at #EndSARS protesters and killed scores in the process. The medium also qualified the palpably violent protests as bloodless, despite the overwhelming destructions perpetrated by the protesters.

But CNM is not surprised at CNN’s latest outing, because we have prophesized in the past that some foreign forces are in connivance with a few wealthy and disgruntled elements in Nigeria to destabilize the country. We have raised this alarm several times to the public that some foreign agents, after the disunity of Nigeria were also adroitly behind the plots.

The latest report by CNN in its edition of November 18, 2020, is a clear testimony. It is an unmitigated case of falsehood, mischief and lies, which nicely indicated and proved incontestably that those who instigated the youths to set Nigeria on fire are now coming out obliquely to show themselves. That’s why the CNN came back, 29 clear days, after the Lekki incident to revive it, after the realization that the initial plots have been smashed by the FGN.

To demonstrate that CNN has no corporate dignity and burdened by a tainted reputation, the attempts to rejig and twist the facts to give it a semblance of wrongdoing on the part of the FGN and security agencies, it was pushed to contradict its released casualty figures on a single incident now and in its earlier reports, yet irresistibly proceeded unperturbed because they were on a mission.

Nigerians should bear us witness that the same CNN had ostensibly followed the hoax of some Nigerian social media activists on the #EndSARS protests by claiming a death toll of 38 persons killed by soldiers at Lekki in its October 23, 2020 edition, three days after the incident. In reverse mode 29 days later, precisely on November 18, 2020, the same international news medium, recanted itself, after it said, it devoted time to conduct a so-called thorough investigation of the Lekki Toll Gate shooting but released to the world a casualty figure of two persons.

It was the famed Othman Dan Fodio who told us, “Conscience is an open wound, only truth can heal it.” Even if CNM bends backwards to accept the latest CNN’s self-discrediting report, which of the account of casualties should Nigerians accept as true or false? Its previous casualty figure of 38 or the latest two persons?  If CNN believes so much in its newest report of two dead persons, it should exhibit a functional corporate conscience to first retract its earlier report, apologize to the FGN and Nigerians publicly for the sensational reporting before the veracity of the present hogwash would even qualify for scrutiny.

We also strongly take exemptions to CNN’s current one-dimensional investigative documentary on the Lekki shootings. It defeats sound wisdom and abuses journalistic ethos profoundly, for an international new medium which postures as conducting an independent investigation of controversial public protests with two sides to be partial to the extent of completely ignoring, a searchlight on the other side.  But CNN conveniently did it. It’s not enough to claim official sources refused to speak. Did the official sources speak before CNN coupled its mountain of lies in favour of the protesters?

These are signs which have betrayed CNN’s motives in Nigeria and exposed it as hired media mercenaries after a hatchet job.  The CNN’s deliberate exclusion of the barbaric killings of security agents, civilians and the reckless destruction/looting of private and public properties of Nigerians by the #EndSARS protesters is an apt expression of its battered professional reputation and therefore, it is dangerous to trust any report emanating from this channel as realistic anymore.

CNM wonders why CNN never saw the quantum and magnitude of destructions by #EendSARS protesters. Imagine and as verified by the FGN, the #EndSARS protesters murdered 57 civilians, 37 policemen, and six soldiers in the days of protests. They injured 196 policemen, destroyed 164 police vehicles and set ablaze 134 police stations across the country.

It is hard to believe an “impartial” CNN never noticed or considered it worthy to reflect in their investigative report and qualified the protests as peaceful. The lives of Nigerians brutally terminated by the incensed protesters were less worthy of CNN’s attention, except the “hoaxed Massacre” at Lekki Toll Gate. This medium must have had its company motto designed and approved by Lucifer.

CNN should wake up from the blind hatchet jobs it is contracted to do. Truth fights back.  It goofed in Nigeria terribly and the world is increasingly frowning at their public media mercantilism.  It should accept the reality that some disgruntled elements are out to destabilize the country and recruited it to consciously water this agenda to fruition.

We know CNN as satanic agents, but Nigeria is a forbidden land to practice their trade. Let them look elsewhere. CNM wished to again console shocked Nigerians and the rest of the world that no one should be surprised again as it is proven for the umpteenth time that some ininterestingoreign forces were behind the protests across the country. But they will not break nor defeat our collective resolve to resist them mightily, by the grace of God Almighty.

Thank you all and journey merciless back to your various destinations.