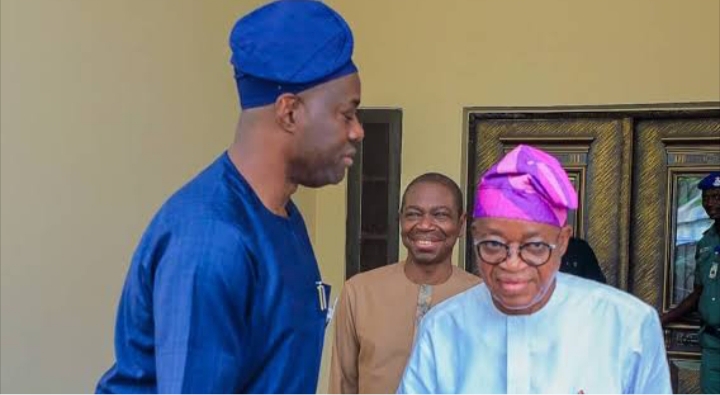 They say, “Let’s break the chains that hold us back and throw off the ropes that tie us down.” – Psalm 2:3

When I read about the decision of the Nigeria Universities Commission (NUC) on LAUTECH, I had a two-year flashback and picked a paragraph from one of my articles I wrote to suggest solutions to then visitors of the institution titled LAUTECH: Illusions, political plays and resumption.

Excerpt: “The day visitors of LAUTECH come together, bury their egos and sit to discuss critical solutions that come with sacrifices, focusing on the growth and development of the school, the problems of the institution will be crumbled. This is the very first step of rebuilding LAUTECH”.

The jointly owned institution has really suffered neglect as an institution. Thanks to TETFUND, the decay would have been legendary and worse due to lack of attention and positive contributions interms of infrastructures from her owners. The one-time best state university in Nigeria has experienced more evils than good. The story of the institution’s neglect is worse than the tales of several tertiary institutions in the country. Besides the grave administrative problems, opaque and complex finances, sentiment is one of the greatest causes of its backwardness.

But I’m delighted that the crushing hope of growth and dying flames of progress have been rekindled by the new development in the school and I hope it will be permanent. The institution has been through a lot in the hands of visitors who does not only believe in her history of being jointly-owned but looked at it from different perspectives (legacy and inheritance). This allowed sentiments to define and frustrate every peaceful process of separation they embarked on. As natives of each visitor sometimes create unnecessary tension and fears of domination, those who survive and make cool funds through the misunderstanding and crumbling status of LAUTECH also play their parts, putting the institution in a difficult corner to be different in reverse. They know that LAUTECH can not become great without sacrifices but no visitor was ready to make sacrifices because the greatness and survival of the school is not a priority to them.

When I came across the story of separation, I was surprised. There is no way you will understand the sad story of LAUTECH and won’t be surprised. We have had visitors (Olagunsoye Oyinlola, Alao Akala, Rauf Aregbesola, Late Abiola Ajimobi) of same party, caucus, style, allegiance and leadership within same time-frame but they could not reach any agreement on the seperation because their negotiations lack diplomacy. There was a former governor who wanted to hijack the institution from the other as his own way of bringing an end to LAUTECH woes while there was another who was very irresponsible with subventions not only to LAUTECH but other institutions in his state yet does not want to lose grip of the institution.

Fayose to Makinde: I am your political father

Makinde to Shasha residents: Do not resort to self-help

Things were not only in disarray but they made LAUTECH internal politics worse. People who have peacefully worked for years together began unnecessary identification. ‘You are from Oyo, you are a native of Osun’; these statements became the new order of the day then, unity of the school was threatened and there were attacks too. I have always stated that only ready, genuine, plain and sincere visitors can redeem LAUTECH and those who will rescue the institution from total collapse would not be ‘noisemakers’ or ‘skilful politicians’. They will be leaders who are interested in the growth, progress of the school and prioritise the welfare, safety and advancement of workers and students.

Osun state governor, Oyetola appears to be a realist and he has displayed the roles of an excellent administrator on LAUTECH’s struggle. As painful as it can be, it is better to lose LAUTECH main campus than to use the future of students as baits in the continued jointly-owned struggle. Oyetola equally knows that Osun is financially crippled as a result of ‘muscle-threatening’ loans and as a governor who’s not interested in choking Osun residents with ‘crazy taxes’ to increase the IGR of the state, the continued patronage of LAUTECH as a visitor would definitely slower its operation.

There are eight tertiary institutions in Osun state. Six institutions are state owned and they have been neglected for 10 years in terms of intervention from the state and characterised with irregular, little or no subvention. The state institutions comprise of one state university, one state polytechnic, two state colleges of education, one state college of technology and one college of Health Technology. Former governor of Osun state now Minister of Interior, Rauf Aregbesola did not lay a single block in any state institution throughout his tenure in office. These institutions have not fared to expectations interms of growth and advancement due to paucity of funds limiting research works and academic exploits.

This new development is commendable and visitors of the institution deserve an applause. Despite political differences, both visitors allowed the interest of the students and the entire university community to define their roles. I have no doubts that LAUTECH will soar higher and this is the time for the institution to become a cynosure of all eyes.

Those who have been beclouded by politics and expected that Osun will take full ownership of LAUTECH main campus are not sincere to themselves and I doubt if they love students of the school. That Oyo who has no state university was given the LAUTECH main campus situated on its soil does not make Seyi Makinde wiser or more intelligent than Gboyega Oyetola but it shows the level of understanding between the duo.

A fellow citizen of the state, Ibrahim Sarafa said Osun state should push for some monetary compensation to augment perceived indifference in value of facilities both get. Osun holding to LAUTECH is a complete waste and a big burden on Osun lean resources. Governor Oyetola should tell Osun people what else they are getting in monetary value alongside the hospital. I so agree with Mr. Ibrahim Sarafa position.

LAUTECH has really suffered so much. Being jointly owned would have been the best as both states would combine resources to grow the school. But the moment a particular state is found wanting in fulfilling his pledge, creating tension and misunderstanding all times, divorce is essential. I greatly commend the two governors, Seyi Makinde and Gboyega Oyetola.

Apagunpote Olayimika Chocomilo can be contacted via 08164411922 or [email protected]