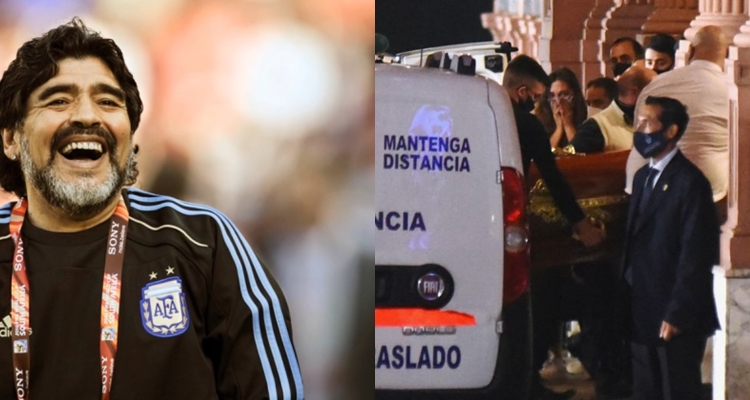 Following the sad death of the Argentine football legend, Diego Maradona who died, aged 60 on Wednesday, his coffin has arrived at the presidential palace in Buenos Aires for a period of lying in state, TV reports showed.

Hundreds of people were already lining up to pay their respects to Maradona, who died while recovering from a brain operation, the images from sports channels TyC and ESPN showed.

Renowned for inspiring Argentina to win the World Cup in 1986, Maradona was most loved at club level for his spells with Boca Juniors in his homeland and Napoli in Italy, where he won the club’s only two Serie A titles.

“You are eternal in every heart in world football,” the Twitter account of the Argentina national team posted alongside a picture of Maradona holding the World Cup.

Maradona also played for Barcelona and Sevilla in Europe and Argentinos Juniors and Newell’s Old Boys in Argentina before embarking on a far less successful managerial career.

“Thank you for everything Diego. FC Barcelona expresses its deepest condolences regarding the death of Diego Armando Maradona, a player for our club (1982-84) and an icon of world football,” Barcelona said in a statement.

Maradona is remembered for his masterly composure on the ball, but he was also famous for his frequent lack of control both on the field and off.

He struggled with addiction, notably to cocaine, and with his weight, in contrast to the more clean-cut image of Brazilian legend and three-time World Cup winner Pele.