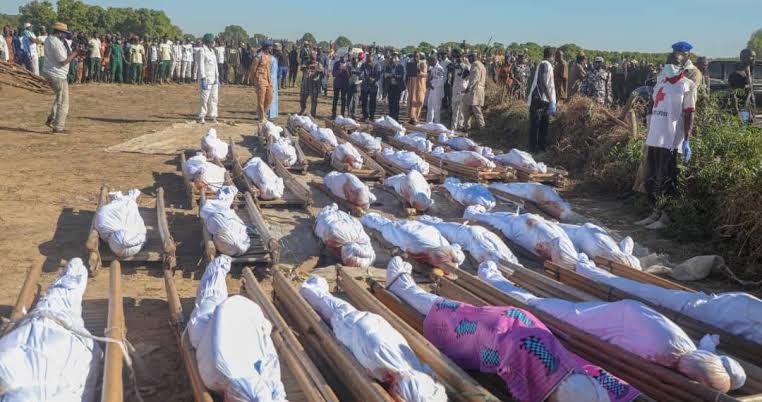 The All Farmers Association of Nigeria (AFAN) has called on the Nigerian government to compensate the families of murdered rice farmers in Borno State.

Recall that the Boko Haram on 29th November this year, killed about 48 rice farmers in Borno State while on their farms.

AFAN described the killing of the rice farmers as an attempt to cripple the nation’s economy by terrorists.

“There is no doubt, the people that have done that they did it to downgrade the economy of the nation, touching the farmer is like touching the nation’s economy.

“We really sympathize and we’re here to show our anger to these people that have done this massacre on our brothers the poor farmers. Whether we like it or not, the poor farmers are the food basket of this nation.

He, however appealed the government to reach out to the families of the slain farmers and compensate them adequately.

“We are also praying that federal government will do something to augment to the families of this poor farmers that were massacred by paying compensation to their families.

“And also we are appealing that federal government should show a kind of concern which they have already done, but they should do more by paying compensation to the families of this people that were killed in cold blood so that they can at least bring more morale to our efforts in the farming industry,” he added.

On plans to reopen the border, the National President of Sorghum Farmers Association of Nigeria (SOFAN) Alhaji Lawal Gada urged the government to consult widely to know if it would be beneficial to continue closing the border or to open it up.

“We want to call on the federal government to make a wider consultation with the stakeholders to evaluate the pros and cons or the advantages versus the advantages of opening or closing the border with the relevant stakeholders, especially the farmers.

“There is need to strike a balance between ensuring food security and employment for the teeming population of Nigeria and other interest groups that are pressuring the federal government to open or close the border.

“So there is need to involve farmers for further consultation on whether to open or not to open the borders the All Farmers Association of Nigeria is calling on the federal government to make wider consultation and engage us as the farmers in further deliberation concerning the border closure viz a viz the opening,” he added.