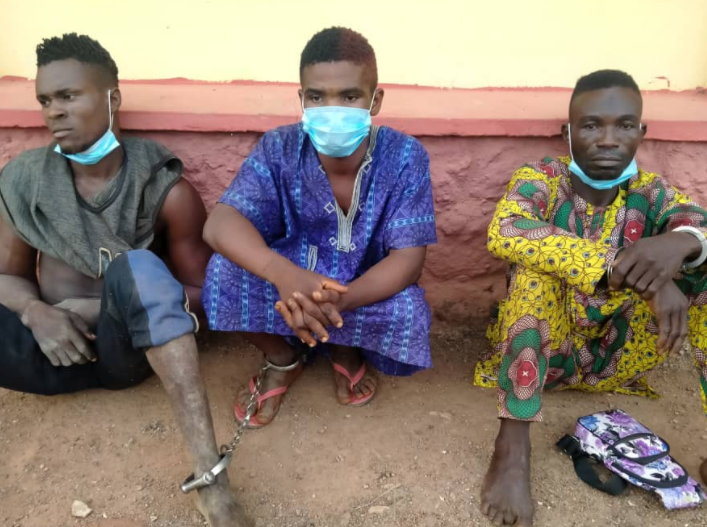 Three men identified as Daniel Ikwe, Micheal Tedungbe, and Idowu Shorunke have been arrested by the men of Ogun State police command over the death of one Rasaq Shotunde who was murdered in cold blood at Solomo Village in Obafemi Owode local government area of the state on Christmas day, December 25.

DSP Abimbola Oyeyemi, the spokesperson of the state police command, while parading the suspects before newsmen, said the men were arrested following a distress call received by the policemen at Owode-Egba divisional headquarters that the deceased was found dead along the road leading to Baseye Village, with his head smashed with a heavy object suspected to be a club.

Oyeyemi said upon receiving the distress call, the DPO Owode-Egba, CSP Mathew Ediae, quickly mobilized his detectives to the scene from where they started a thorough investigation.

“Their efforts yielded positive results when one of the suspects was arrested with the help of people in the Community. The arrested suspect led the police to his accomplice and he was also apprehended.

The two suspects then informed the police that it was Idowu Shorunke who contracted them to eliminate the deceased. Their confession led the police to his house where he was promptly arrested.

On interrogation, the duo of Daniel Ikwe and Micheal Tedungbe confessed that they killed the deceased on the order of Idowu Shorunke who promised them the sum of N500,000 if they carried out the assignment successfully.

They confessed further that they laid ambush for the deceased on his way to the village from Abeokuta where he had gone to visit his son and used a heavy stick to smash his head.

On his own part, Idowu Shorunke admitted being the one who contracted the two others to kill the deceased because of an issue over a portion of land which has been lingering on for a while” Oyeyemi said

Oyeyemi said the suspects have been transferred to the homicide section of the State Criminal Investigation and Intelligence Department on the order of the Commissioner of Police, CP Edward A. Ajogun for further investigation and prosecution, while the corpse had been taken to the general hospital mortuary for autopsy.