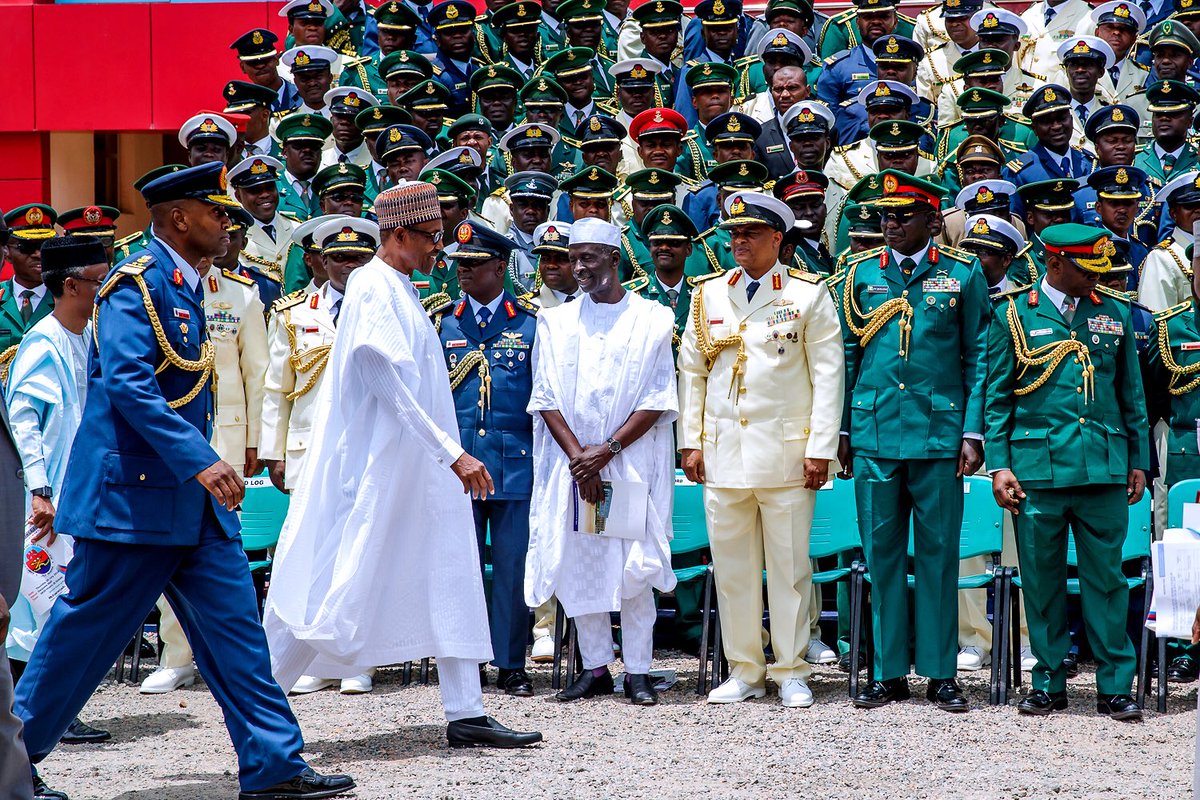 Jesus Christ acquiesced to his challengers because he was on a divine mission. So, it was needless disrupting the course of its divine fulfilment. Nigeria’s leadership by President Muhammadu Buhari aligns with the same tenor.

Like Christ, the President is on a messianic, redemptive and regenerative mission in Nigeria. He came with an unalloyed mind and spirit. Therefore, he silently accepts senseless tantrums hurled at him; he accepts the hurtful banters with admirable mien; the criticisms, spleens, the meaningless blabs and painful persecutions from his adversaries and powermongers resiliently. He has never bulged.

I watched the horrors of the expired Year 2020 and wished it ebbed with the speed of a tornado for a fresh year. The resurgence of insecurities; lethal political combats by muscle-flexing politicians; the economic saboteurs; the inconveniences of the global pandemic Covid-19 and it’s induced economic catastrophes consistently animated my anger against a world and a destiny I deemed cruel.

Nigerians were mesmerized; the President was troubled and terrified at the rapidity of these occurrences which increasingly reinforced the sermons of life’s nothingness. We wrongly assumed the afflictions visited on us is the symbolic failure of President Buhari to offer genuine leadership to the nation.

But while we moaned, lamented and ferociously kicked at Mr. President, particularly on the touchy resurgent insecurities, he was busy working undercover to birth respite to us. I was thrilled when it started manifesting in relieving surges. And from mid- 2020 to this moment, our tormentors; evildoers, satanic agents, detractors, economic sabs, their conspirators and forces of darkness have been compelled to boil in their own pot of hot water.

Mr. had President vowed never to allow the enemies cast Nigeria to the ravenous dogs and cartel of armed criminal gangs and their patrons for a feast. So, the Service Chiefs re- bounced back to assiduous work with a renewed presidential order on quelling insecurities.

Nicely, in the last months, and from Zamfara to Bayelsa ; from Damboa to Idiroko, it’s being incessant hell let loose on our tormentors by our resilient Army. Now, even without the aid of artificial lenses, I have sighted those who schemed furiously to snatch our peace and security. They are languishing in pains and the self-consuming fire they lighted on themselves. They can no longer breathe like America’s Donald Trump. They have lost the nerve, zeal and energy to tether us to the stalk of servile insecurities. Our President is alive; our Armies are ever combat thirsty.

And President Buhari has continued to sustain the fires of organized armed gangs amassed against Nigeria. Even five days ago, in the Northeast region, I learnt troops of the newly launched “Operation Tura Takaibango” under the flagship of “Operation Lafiya Dole” squeezed living juice out of over 28 rampaging Boko Haram criminals at Gujba LGA of Yobe state who assembled in the vicinity and plotted to ambush troops. But it backfired, as the insurgents were neutralized, others severely wounded and weapons, including Anti-Aircraft Guns were seized from the terrorists.

Our troops of “Operation Sahel Sanity” are very impatient with armed bandits, kidnappers and cattle thieves in the Northwest region. I was excited to read news on last New Year day of the arrest of suspected armed bandits at Maraban Maigora in Faskari LGA who had planned to shatter the joy of our festivities. And some of those napped had criminal nexus with a notorious armed bandit leader in Madachi village in Sabuwa LGA of the state. Soldiers are on his trail.

There are countless positive narratives of fruitful decapitations of armed bandits and kidnappers in the New Year. We have assailed them on all fronts. Troops of “Operation Hadarin Daji” accosted the criminal gangs and rescued seven kidnapped victims at Gidan Dan Nunu and Dutsi villages in Zurmi LGA of Zamfara state.

Likewise, on the eve of New Year, two women and a child kidnapped at Kimbisawa village of Batsari LGA in the same state were rescued by our gallant troops who are always gallivanting the troubled areas. In the same New Year, troops encounter with armed bandits in Kuriya village of Kaura Namoda LGA of Zamfara state also sniffed life out of no fewer than 50 armed bandits in a single operation.

Our determined troops are working day and night to deny all criminal elements the opportunity to operate freely in any location in the Northwest. Zamfara state has regained her lost peace. Furthermore, our courageous troops of “Operation Accord,” descended a sledge hammer on armed bandits and rescued some kidnapped victims, also on New Year day at Tungar Ruwa village in Anka LGA of Zamfara State; while soldiers of the “Operation Sahel Sanity,” crushed an armed banditry gang at at Garin Garus and recovered assorted weapons.

And the dossier of victories speaks volumes about the professional competence of the COAS and leader of the counter-insurgency operations, Lt. Gen. TY Buratai. Also troops of “Operation Safe Heaven” apprehended suspected gunrunners at Kafanchan and at Ungwan Carpenter village in Jema’a LGA of Kaduna state as well as in Fobur village in Jos East LGA of Plateau state this year. What about the Kankara and Mahuta schoolchildren?

I was pained that since Nigerians loudly wailed about resurgent insecurities; critics had a field day in lampooning President Buhari and scolding of the Service Chiefs as “expired” military officers; while the National Assembly distracted itself by suspending legislation and oversight functions to resort to frequent passage of somewhat dubious resolutions against Mr. President and the Service Chiefs. But it’s a different tale now. Incredible positive results on extinguishing the fires of resurrected insurgency and insurrections have condemned the vilifiers.

Except some of us who are blind; or have chosen to be blind or veiled by partisan lenses, we can attest that in the last few months, Nigerian troops have neutralized over 2,403 terrorists and armed criminals throughout Nigeria. I believe it is a big blow on the human resources’ strength of these armed gangs.

And the good news is really troops’ rescue of over 864 of our brothers and sisters; whether adults or children from the claws of kidnappers in different locations in Nigeria. On the economic plane, troops have recovered a total of 9,684,797 litres of stolen AGO and 33,516,000 litres of DPK from maritime specialized armed criminal gangs; 46,581.8 barrels of stolen crude oil and 22,881,257 litres of stolen Premium Motor Spirit (PMS) were recovered by the troops of the Armed Forces of Nigeria in Southern Nigeria in these few months.

And can we truly seek to obviate or beat the records of troops which shows that over 1,910 criminals have been arrested and large cache of arms, ammunitions and equipment are confiscated from them? Who is not excited that our troops overpowered these satanic forces; conquered these terrorists and armed gangs at the point of unleashing their planned heist on us very destructively?

Therefore, when I reviewed the year just ended and the magnitude of successes of the ongoing counter-insurgency operations in 2021, I was religiously humbled. I must be economical with the truth, if I fail to admit in all ramifications that the disparaged President Buhari and the Service Chiefs have ushered in the much desired and long-awaited salvation for our country.

The enemies of Nigeria are now in pains. They have made up their minds to let us go; they have no alternative than to free us like the Biblical King Pharaoh who reluctantly released the Israelites’ from bondage by God’s divine command.

Let me ask Nigerians in truth; If we have our ways to sack the Service Chiefs, as vigorously campaigned earlier, would anyone be courageous to agitate for it again for any genuine and patriotic reasons? The answer is obviously NO! I can sense some quietness now. Those who wanted the Service Chiefs sacked have relapsed into what I can best describe as a state of amnesia.

Something pricks me fervently that if the Senate has any option today, they would rather demand that the current set of Service Chiefs be given another five more years to stay on board in order to thoroughly cleanse Nigeria of these conspiratorially armed gangs. This is nothing but the truth. But it’s rather unfortunate that the sack or sustained retention of the Service Chiefs is what only the Commander-In-Chief, President Buhari can determine. And he is satisfied with their performance.

However, let us be human enough to confess that truth has finally prevailed. Our salvation has come. The end of insecurities has come. Our total resolve that a full kinetic approach be given to the resurgent violence and bloodshed is now paying off. I appreciate the Chief of Army Staff for bringing salvation to us.

Agbese is a publisher and patriot writing from Agila, Benue State.