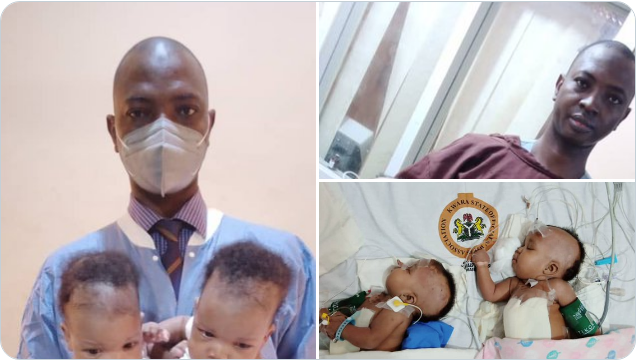 A conjoined female twins has successfully been separated at the University of Ilorin Teaching Hospital.

According to the University of Ilorin Teaching hospital, the conjoined female twins were successfully separated by a team of medical experts on Thursday, January 14.

The babies were separated by a 66-member of Nigerian team of paediatric surgeons, paediatricians, paediatric cardiologist, anaesthetists, cardiothoracic surgeon, nurses, pharmacists, behavioral scientists and many more.

Sources said that the feat by the institution’s team of medics was despite the dearth of equipment at the hospital. Addressing reporters in Ilorin, the Chief Medical Director (CMD) of UITH, Prof. Abdullah Yussuf, attributed the feat to the commitment and determination of the 66-member team.

Yussuf said medical tourism abroad by some privileged Nigerians could be halted if the needed medical equipment were made available at the nation’s public hospitals.

The team was led by Paediatric surgeon, Prof Lukman Abdul-Rahman who is pictured carrying the babies.