by Agency Report
in Press release
Reading Time: 6 mins read
0 0
A A
0

The Centre for Justice in Africa (CJA) says it has uncovered a fresh plot by the International Criminal Court (ICC), Amnesty International (AI) and Transparency International (TI) to destabilise the Nigerian military through a “fictitious” report.

The centre, which raised this alarm at a press conference on Monday in Abuja, also revealed that the leadership of the Armed Forces of Nigeria are the target.

Speaking on behalf of the centre, Director of Communications, Comrade Dauda Owolabi Abdullalteef, noted that the three foreign groups have formed an evil alliance to undermine the Nigerian military.

Comrade Abdullateef noted that each time Amnesty is unable to hold back the Armed Forces, it outsources the responsibility to Transparency International which then brings corruption allegations against the military.

According to CJA, both organisations and more recently, the ICC, are operated by the same cabals and set of subversive saboteurs.

The centre, however, urged the Federal Government to immediately call Amnesty and Transparency to order, by writing formal complaints with cease-and-desist orders to their international headquarters.

It further demanded that the FG set up a committee to review the country’s continued membership of “monster” ICC. 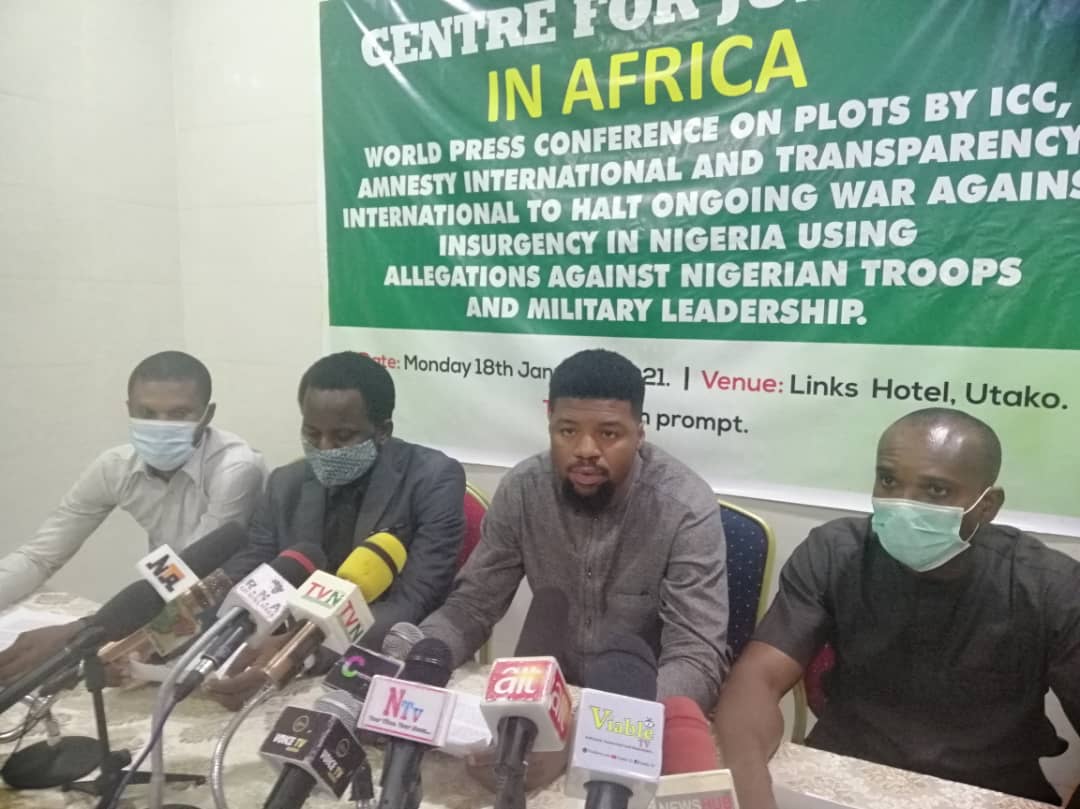 Read the full statement below

Gentlemen of the press, it is with the utmost sense of national duty and responsibility that we invite you here today. Our invitation is out of our concern for an escalation in the onslaught of subversive activities against the Federal Republic of Nigeria by organizations that ordinarily are expected to promote the corporate integrity of nation-states.

The organizations we are referring to are: (i) The International Criminal Court (ICC) (ii) Amnesty International (iii) and Transparency International.  These organizations have turned themselves into tribunals that exist only to preside over the affairs of Nigeria. They are specifically targeting the Armed Forces of the Federal Republic of Nigeria in a manner that undermines the ability of Nigeria to address the problem of terrorism and extremism besetting it.

It is interesting to note that these organizations have perfected the subversive operation they are running against Nigeria in a manner that makes it appear as if they are running their legitimate day to activities. The ICC, for instance, hounds Nigeria’s military officers and commanders in a way that appears as it is legitimately investigating war crimes and crimes against humanity; Amnesty International keeps up the charade of pretending to monitor adherence to human rights protocols while Transparency International has perfected the strategy for finding corruption in transactions that never took place.

Several Nigerians, groups and organizations had in the past expressed concerns about the true intents and agenda of these organizations without Nigerians paying heed. The recent declaration by ICC that it has grounds to investigate Nigeria’s military for rights violation in the war against terrorism in the northeast of Nigeria. However, this is merely a facet in the misguided report from the ICC. The other subversive contents in the report included that it placed the Nigerian Armed Forces on the same pedestal with Boko Haram/ISWAP terrorists. This was no error or accident; it was a calculated attempt to diminish the country’s military and elevate Boko Haram fighters to the level of a national army ahead of when its Amnesty International allies will market a negotiation programme. Nigeria will then be cornered into negotiating with terrorists as if they are a sovereign country.

Worryingly, Boko Haram/ISWAP is merely a card in the evil plot put together by ICC with its Amnesty International and Transparency International collaborators. The ICC report clearly identified other wildcards in the nefarious agenda. It listed the Islamic Movement in Nigeria (IMN) and the Indigenous People of Biafra (IPoB) as victims without acknowledging the crimes they have committed against Nigerians and continue to commit. It also failed to properly name them as terrorist groups, which suggests that ICC is prejudiced to the point where it has refused to recognize Nigeria’s competent judiciary that proscribed these groups.

ICC had consequently lived up to its billing as a lynch mob that exists solely to vilify, victimize and humiliate African countries by dragging their leaders before it even when no crimes are committed with the flip side that leaders of some countries can order drone strikes that kill women and children on an industrial scale or invade sovereign nations to ruin them without being held to account. This racist disposition has been repeatedly reinforced by the ICC and it seems it is now on the path to becoming rabid with its latest incursion into Nigeria.

Additional facts about the ICC’s activities is that the so-called evidence it relied on to decide to investigate the Nigerian military was largely produced by Amnesty International. The negligible portion of the evidence that was not produced by the international NGO was sourced from its local affiliates that have sub-contracts to malign the reputation of Nigeria’s security forces.

A lot has been said about how Amnesty International sources its tainted evidence. It coaches respondents on what to say and has even gone as far as using paid actors as interviewees. Its Country Director, Osai Ojigho during recent protests in Nigeria, infamously accused the military of committing genocide but could not provide a single shred of evidence other than to retort that the Armed Forces have a practice of taking away evidence when she was pressed for proof of her claim during a television interview.

This same Amnesty International had been implicated in passing military intelligence obtained in the course of its work to Boko Haram terrorists such the insurgents were then able to evade military operations launched against them and simultaneously able to launch deadly attacks. Whenever the military issues classified advisories about areas that humanitarian and rights groups should avoid, Amnesty International passed the same to terrorists until it was found out, which promoted it to become more antagonistic of the military.

We have not also lost sight of the fact that Nigeria was denied access to buy weapons based on lies that Amnesty International packaged as reports. This denial allowed the terrorists to boldly operate for a while until the military leadership that came with President Muhammadu Buhari’s administration found innovative ways to get the needed hardware and logistics to prosecute the anti-terrorism war. This ability to fight the war against Boko Haram, ISWAP and other brands of terrorists is what has riled Amnesty International to a point where it will tell just any lie to undermine the fighting capacity of the Armed Forces.

Gentlemen of the press, we invite you to note that each time Amnesty International discovers that it is not able to hold back the Armed Forces of the Federal Republic of Nigeria it outsources the function to Transparency International, which then brings allegations of corruption against the military. It is instructive to note that the supposed corruption is sometimes around weapons that Amnesty International – induced sanctions have prevented the country from buying. They fail to explain how money what has not been released can be stolen.

Today’s world press conference is, therefore, to draw global attention to the evil plot by agents of destabilization led by the ICC, Amnesty International and Transparency International to ruin the peace and stability of Nigeria through fictitious charges that they are now cooking up against the leadership of the Armed Forces of the Federal Republic of Nigeria under a new report that ICC is about releasing.

This is why we salute the courage of the Government of the Federal Republic of Nigeria in boldly stating that the subversive activities of the ICC, Amnesty International and Transparency International are undermining the ability to effectively fight Boko Haram/ISWAP and other terrorists’ threats. We want the government to go further in taking actual steps to curtail the excesses of the identified groups.

We, therefore, demand that the Federal Government immediately calls Amnesty International and Transparency International to order, which includes writing formal complaints with cease-and-desist orders to the international headquarters of these organizations.  These should be backed with formal protest letters to the embassies or high commissions of the countries where these organizations have their headquarters. They cannot continue to jeopardize the safety of Nigerians for whatever reason.

As for the ICC, we demand that the Federal Government immediately set up a committee to review Nigeria’s continued membership of this monster. The committee’s terms of reference should include an interrogation of the proprietary of Nigeria remaining a signatory to the Rome Statute when it is now apparent that its creation is being wielded as a weapon of mass destruction against Nigeria. The Federal Government must ensure that this is done in the shortest time possible.

As for ICC, Amnesty International and Transparency International, we want to put them on notice that the day of reckoning will eventually come and they shall answer for their crimes against Nigeria because ultimately, the will of a people becomes the highest court.

Shehu Sani: There is evident confusion on how to tackle the second wave of COVID-19