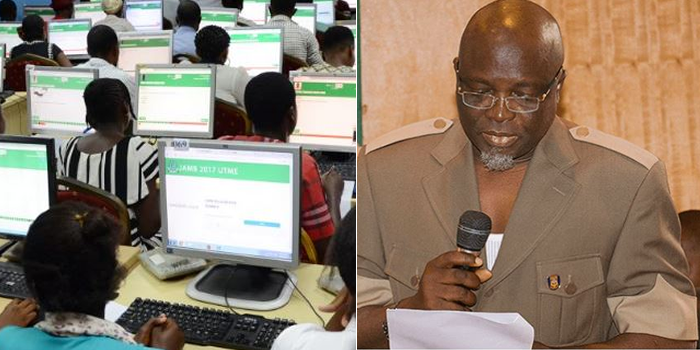 The Joint Admissions and Matriculation Board, JAMB, has said it would spend not less than N100 million on the prosecution of 200 out of the over 400 persons involved in impersonation in the 2020 Unified Tertiary Matriculation Examination, UTME.

This came as the board hinted of proliferation of fraudulent Computer Based Test, CBT, centres in some parts of the North.

It also disclosed that over 400 candidates currently seeking admissions into institutions across the country were involved in admission fraud, alleging that some tertiary institutions were accomplices in the widespread irregularities.

Registrar of JAMB, Prof. Ishaq Oloyede, made these known, Tuesday, in Abuja, at a press conference he held to parade two suspects arrested in Kano for attempting to change a photograph used in UTME registration in Bayero University, Kano.

He claimed the Board has the ability to detect any illegal attempt to change candidates biometric data and other details used in UTME.

He reminded tertiary institutions of the warning of Minister of Education, Adamu Adamu, that any school that allows candidates to alter their UTME details in the course of registration risk being treated as an accomplice to fraud.

On the planned prosecution of candidates and other individuals involved in impersonation and use of mercenaries, the JAMB boss said the Board lacked the resources to ensure all of them are brought to book.

He said: “This year we have over 400 people that have already been caught, who those that wrote the exam are different from those who are registering (in universities). We have put certain things in place and we are expecting each of the institutions to come forward.

“The institutions should be vigilant and we appeal to those young ones that the game is up. There is nothing they do that will not be detected.

“At the appropriate time, we should prosecute at least 200 out of the 400. What we intend to do is to pick like five from each of the states of the federation.”

On what it will cost the Board to ensure effective prosecution of identified suspects, Oloyede said the Board will have to spend at least N500,000 on each case (which will bring the amount to N100 million for 200 persons).

His words: “To prosecute one case you will have to spend nothing less than N500, 000 because your staff will be going from one place to the other. When they go to court, at times the court will not sit, you will go back as witness, somebody travelling from Kano to Abuja or Abuja to Kano, will be going five times to do that.

“It cost a lot of money. Technology will give us all of them, we will now use federal character by picking across the states. And then prosecute, because we don’t have the resources to prosecute all of them.”

Speaking further, Oloyede lamented that the North is fast becoming epicentre for JAMB exam fraud as the top 20 Computer Based Test (CBT) centres caught in the act of trying to change candidates picture and other details are all from Kaduna, Kano, Katsina, Zamfara, Gombe, Bauchi, Borno and Sokoto states.

He, however, said some of the owners are not from the Northern states, citing a case of three CBT centres notorious for abetting such malpractices in Kano that are owned by a woman from a South-South state.

He said the arrest of Buhari Abubakar, a 2020 JAMB candidate, and Mohammed Ajeru Sanusi, a CBT centre operator in Kano, for trying to change the former passport, testified to the ability of JAMB to detect any such fraud in any institution.

The 27 years old Abubakar, who applied for Islamic Studies at BUK, told newsmen that he paid N21,500 to Sanusi to secure an exam taker for him with the promise of paying N4, 500 balance, prompting the latter to engage one Umar Shani for N8, 000 to sit for UTME on his behalf.

But the duo ran out of luck when Abubakar details in BUK carried the passport of the exam taker.

Abubakar’s decision to get the passport change to reflect his image made him prevail on Sanusi to again help him out, a move that landed both of them in trouble.

Both Abubakar and Sanusi, who claimed not to know the implication of their actions, however, pleaded for mercy, with the latter vowing never to get close to anywhere or anything that has to do with UTME.