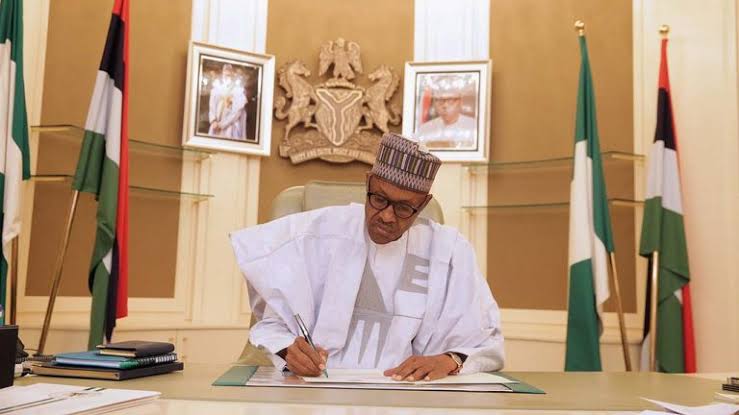 President Buhari who wrote to the Senate, is seeking for the screening and subsequent confirmation of the newly appointed Service Chiefs.

Buhari in a letter to the President of the Senate, Senator Ahmad Lawan, dated 27th January 2021, said that the screening was being sought in furtherance of Section 18 (1) of the Armed Forces Act Cap A.20 Laws of the Federation of Nigeria.

The letter was read on the floor of the Senate yesterday by the President of the Senate, Senator Ahmad Lawan upon resumption of the Lawmakers from the Christmas and New year holiday.

The letter read: “In compliance with the provisions of Section 18(1) of the Armed Forces Act. Cap A20 Laws the Federation of Nigeria 2004, I hereby forward for confirmation by the Senate, the appointment of the under listed officer as the Chief of Defence Staff and Services Chiefs of the Armed forces of the Federal Republic of Nigeria.

Meanwhile, President Buhari in a separate letters to the Upper Chamber, sought the confirmation of Mr. Aghughu Arhotomhenla Adolphus for appointment as the Auditor-General of the Federation.

In the letter read yesterday on the floor of the Senate by the President of the Senate, Senator Ahmad Lawan, President Buhari said the request was in pursuant to Section 86(1) of the Constitution of the Federal Republic of Nigeria (as amended).

Aghughu has been acting as the Auditor-General since the voluntary retirement of Mr. Anthony Mkpe Ayine from service upon attainment of the mandatory retirement age of 60 (sixty) years on 25th October 2020.

The Auditor-General designate who hails from Edo State and, holds a master’s degree in economics, is a Fellow of the Association of National Accountants of Nigeria, Member of the Nigerian Institute of Management and Associate member of Chartered Institute of Taxation. He became an Auditor in the Office of the Auditor-General in 1992 and was promoted to the rank of Director of Audit in January 2016.

Recall that President Muhammadu Buhari had in December 2016, forwarded the name of Ayine to fill the post that was held then by Florence Anyanwu in acting capacity.

Ayine’s name was then forwarded six months after the then former Auditor-General of the Federation, AuGF, Samuel Ukuru proceeded on terminal leave.

Also President Buhari forwarded to the Senate for screening and subsequent confirmation the name of Barrister Victor Chinemerem Muruako as Chairman for the Fiscal Responsibility Commission.

The request was contained in a letter dated 18th January, 2021 and also read during plenary by the Senate President.

According to President Buhari, the confirmation request was made in accordance with provision of Section 5(3) of the Fiscal Responsibility Act, 2007.

Barrister Muruako, a legal practitioner had served as the Secretary to the Fiscal Responsibility Commission and currently acts as the Chairman of the Commission. He hails from Imo State