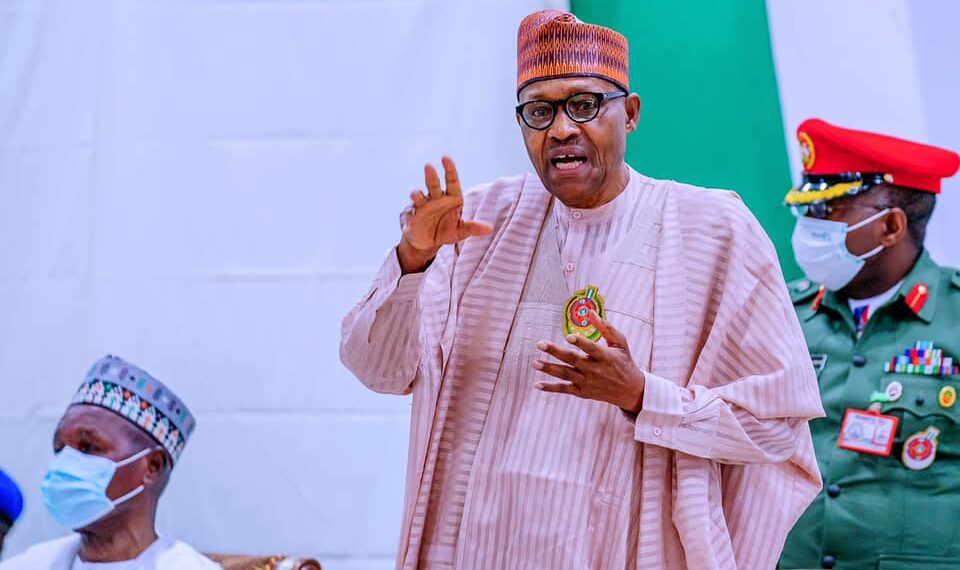 The President, who also offered scholarships to the ex-corps members for the pursuit of postgraduate studies up to a doctoral level in any university in Nigeria directed the relevant government agencies to ensure timely implementation of all the incentives for the award recipients.

This is as one of the beneficiaries of the automatic employment, Miss Jane Agbo, who graduated from the Federal School of Dental Technology and Therapy, Enugu but did her primary assignment at Dental Center, Ahmadu Bello University Teaching Hospital, ABUTH, Tudun Wada Zaria, said that she rendered free health care services to 2000 Almajiris and 750 elderly people during her service.

He urged the honourees to sustain the patriotic zeal that earned them the award and avoid being misled by unpatriotic elements in the society.

According to him, “It is noteworthy that the young men and women being honoured have excelled in the four cardinal programmes of the Scheme, namely: Orientation Course, Primary Assignment, Community Development Service and Winding-up/Passing-out, which formed the basis of assessment for the Honours Award.

“On behalf of the Government and the good people of Nigeria, I heartily congratulate those honoured on standing out from their peers in order to merit the honour being bestowed upon them.

‘‘You have proved yourselves worthy ambassadors of your respective families and the National Youth Service Corps. I am very proud of you and confident that the Award shall spur you to greater service to the Nation and humanity,’’ he said.

The President also used the occasion to commend the founding fathers of the 48-year-old scheme, notably General Yakubu Gowon, who joined the occasion virtually.

President Buhari stressed that NYSC has remained a bastion of national unity and integration by exposing our youth to diverse cultures and traditions, thereby making them appreciate our similarities and diversities.

He said, ‘‘Through the Scheme, walls of ethnic stereotypes are pulled down, and bridges of unity built, especially with enduring friendships and relationships resulting from healthy interactions during the service year.

‘‘This has strengthened the mileage covered in our quest to be a nation with one common vision and destiny despite our plurality.”

On efforts to sanitise the mobilisation process of the Scheme, the President directed NYSC management to ensure that only those who meet the required criteria participate in the one-year national service.

President Buhari praised Nigerian youths on National Service for frontally confronting and remaining at the forefront of the war against COVID-19 pandemic.

He noted that the inherent innovation and resilience of Nigerian youths, which members of the Service Corps demonstrated through the production of face masks, hand sanitisers, liquid soap, and several fabricated machines, contributed towards curtailing the spread of the pandemic.

‘‘The enormous contributions members of the Service Corps are making to the improvement of our education, health and social sectors, as well as rural development, remain a shining testament to the Scheme.

‘‘This has portrayed successive generations of Corps members as veritable agents of development,’’ he said.

Commending the Federal Ministry of Youth and Sports Development and NYSC for the dogged implementation of the self-reliance programme of government for the youths, the President urged them to sustain the tempo of their activities in this direction.

‘‘It is critical that our youths benefit from the N75b Nigeria Youth Investment Fund.

‘‘They should also be encouraged to key into other youth empowerment programmes of Government such as Youth Empowerment and Development Initiative, Youth Initiative for Sustainable Agriculture in Nigeria, Presidential Youth Empowerment Scheme, and Young Farmers Scheme among others,’’ he said.

Declaring that his administration has an abiding faith in the Nigerian youth, the finest part of which Corps members belong, the President said he had demonstrated this belief by signing the “Not too Young to Run” bill into law, so as to accommodate youth in the political landscape.

“I wish to remind our youth, who have the greatest stake in the future of our country, Nigeria, and of course the generality of Nigerians to embrace our initiatives on value reorientation, as this is essential for the achievement of a country we shall all be proud to bequeath to future generations,” he said.

President Buhari also urged Nigerian youth to avoid all economic and social vices that are contrary to the wellbeing and progress of the country, admonishing them to adopt a collective approach, premised on sound values to build a great nation.

“As young men and women, I recognize the extreme peer pressure you experience; it is my plea to you to be wary of those who would like to exploit your youth, intelligence and positive energy by channelling you into wrong paths.

“Avoiding such acts honours not just your families who have sacrificed to see you attain greater heights, but also brings pride to your fellow citizens,’’ he said.

Speaking in an interview, Miss Agbo said, “I am happy I was conferred this award and I think the major reason is just not because of the services I rendered but because of the humility and impact made in the host community. And to that, I am grateful to the community, to the NYSC scheme at large.

“I delivered free oral health care services to over 2000 Almajiris and over 750 elder people from 50 years and above.

“I delivered an electrically constructed borehole to my place of primary assignment which is Dental Center, ABUTH, Tudun Wada Zaria.

“For the borehole, I was solely sponsored by Our Career foundation, the Core Muslim foundation and for the free oral health care, I was sponsored by the Alba Bello Trading Company.”

On her part, Rahab Musa, an indigene of Gombe State, who also graduated from the Federal School of Dental Technology and Therapy, Enugu told journalists; “I rendered services to the IDPs and the less privileged I met. I gave oral health awareness in the IDP and I distributed clothes, I gave them free treatment, toothpaste, toothbrushes.”

A highpoint at the combined Presidential Honours Award was the reading of citations of the best awardees for each service year.

For the 2018 set, Rejoice Onyeyirichi Anyaogu Rejoice, who emerged first, served in Taraba State and she won the National Council of Women Societies (NCWS) Award for the Best Female Corps Member in Community Development.