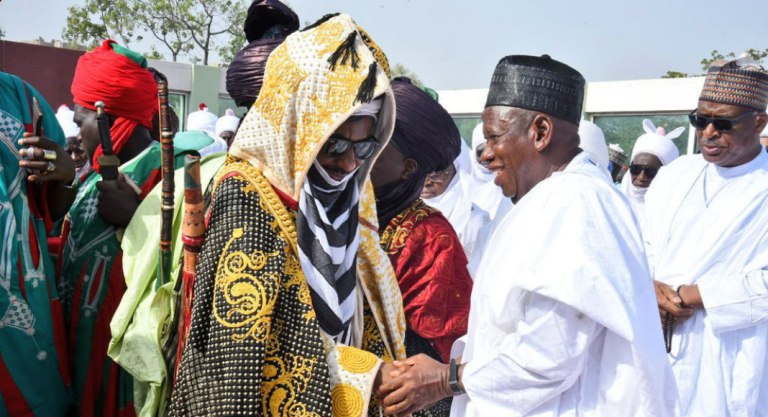 I removed Sanusi for not watching his tongue — Ganduje

Kano State Governor Abdullahi Ganduje has said he deposed the former emir of Kano Muhammad Sanusi because he did not understand the responsibilities of a traditional ruler.

Sanusi was dethroned in March 2020 by the state government, six years after ascending the throne.

Speaking on Channels Television’s Politics Today on Friday, Ganduje said Sanusi did not bridle his tongue but continued to be a social critic instead of assuming the role of a traditional ruler.

“The real story was that the deposed emir of Kano did not understand the responsibilities of a traditional ruler especially for a strong institution like that of Kano,” he said.

“The emir of Kano was a social critic, a celebrated social critic and there was nothing wrong with that because he is an educated person; there is freedom of speech.”

Ganduje noted that as deputy to former governor Rabiu Kwankwaso, Sanusi was an executive director in a bank.

“He (Sanusi) made a statement that instead of providing water in the state, we were building a house in Abuja – the governor’s lodge in Asokoro.

“I remember my governor said either the bank sacks him or we should withdraw our accounts from the bank and the bank did not sack him, so we withdrew N969m from that bank. That was the work of a social critic,” he said.

According to Ganduje, when Sanusi became the emir of Kano, he refused to change his stature to that of a traditional ruler.

“He is an economist but he failed to understand (that) in economics, you have to inherit assets and liabilities.

“That was the problem. That was the biggest problem; that he could not change his mode of life from social critic to an institution.