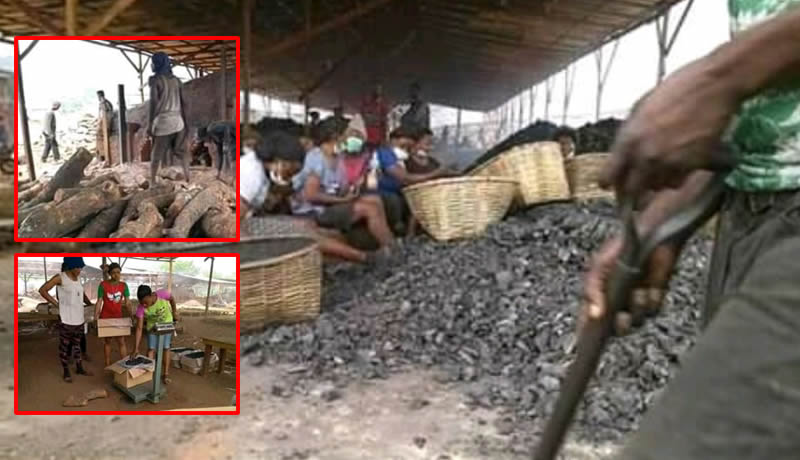 For the people of remote community of Obimo in Nsukka Local Government Area of Enugu State, it is just but a matter of time before  a huge ecological disaster happens.

Tucked away inside a rainforest bush, with obscure signpost and away from the prying eyes of passersby on the Nsukka/Ogurugu Expressway, a Chinese charcoal company is currently causing an untold degradation on the environment through the production of illegal charcoal in huge commercial quantities and exportation of same to China, where it is processed into whatever final product charcoal is a raw material for. 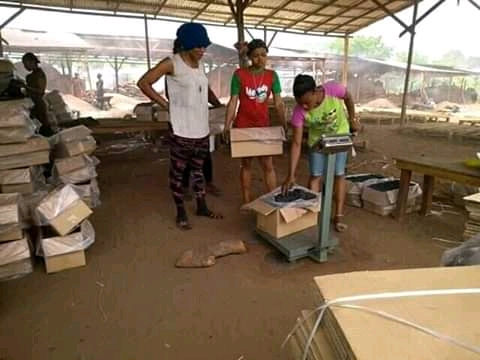 WITHIN NIGERIA investigation revealed, the factory occupies about 8,000 square metres of land. The nearest village to the factory, Akachele, reportedly leased the land to the Chinese for 10 years. An inhabitant of the area who preferred anonymity disclosed that the Chinese in turn paid N10 million for the land.

Perhaps, what baffles many indigenes of the State is that the factory is currently operating without official permits from the State and federal agencies, an act that violates the National Environmental (Control of Charcoal Production and Export) Regulations, 2014.

Further investigations revealed that the company, Kwo Chief Investment Limited, does not have official permits to engage in commercial production and export of charcoal.

Further checks showed that the moment, no company has been issued with a permit to produce and export charcoal since all the permits expired in December last year and fresh permits are yet to be given, according to records from the Federal Department of Forestry.

Nigeria last issued permits to 112 companies to produce and export charcoal between 2016 and 2017 but Kwo Chief Investment Limited has never been given permit to either produce or export charcoal, our investigation further revealed.

However, in Obimo community where the company currently operates, its activities are said to be tucked away hidden in the bushes where the locals cut down trees and supply the logs to the factory.

Though official regulations bar individuals and companies from exporting charcoal without permits, the Chinese still export containers of packaged charcoal through the Onne Port in Rivers State even when their company is not registered with the Corporate Affairs Commission,CAC.

It us revealed that they are able to export the charcoal by bribing Customs officers, according to Within Nigeria findings. A customs officer who preferred anonymity told our reporter that the Chinese charcoal producers operate in Nigeria under fake companies because they know that their activities are illegal. When they use freight forwarders to get the charcoal outside the country, their real companies receive the products in China and Korea, the source said.

How they source the raw materials

Investigations by our reporter revealed that the company goes for the best and special wood in the zone. 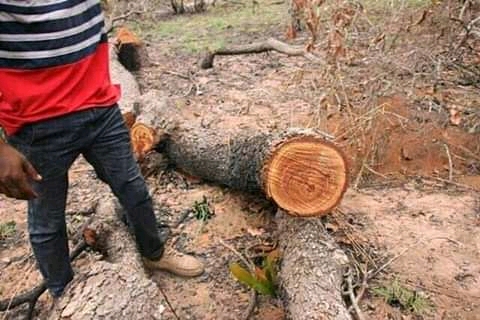 The locals go into the savannah forests to hunt for reddish hardwoods which they identify as Ahaha because that is the specie that the Chinese currently buy. However, reforestation, as specified by official regulations, is impossible in the case of the Chinese factories because they do not replant

The hardwoods for charcoal production in Obimo are sourced by the locals from the forests around Nsukka and Uzo-Uwani Local Government Areas.

Like other youths who have seized the opportunity, David Odo has become a regular supplier of hardwoods to the factory. He is paid N6,000 per the scale that the factory uses. He logs at Opi, about 26 kilometres from the charcoal factory, in a sprawling forest reserve that stretches over a long distance.

“A full tipper-load yields between 8 and 9 scales,” Odo. told our reporter. “I pay the chainsaw operator 10k, give loaders 8k and 20k for the tipper. So, there is enough gain.”

According to him, his main challenge is creating an easily accessible path into the forest because the tipper drivers have been turning him down. He said buying a pickup truck would be his next big move “to fully engage in the business.”

Odo, who was unaware of the negative impact of his logging, argued that the wild trees he cut down are not useful; rather, they have been occupying the space for economic trees like cashew, mango and others. 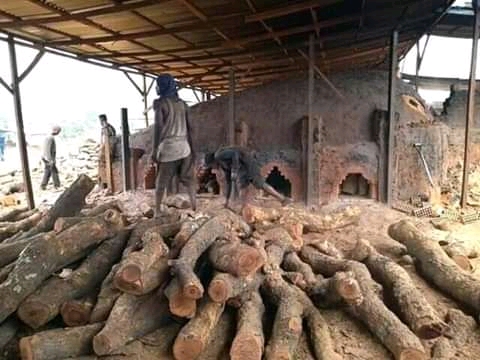 Six men usually fill an oven with logs of wood. Two persons go inside the oven to arrange the logs according to specification.

For this reason, workers are exposed to all sorts of domestic hazards. Recently, two labourers nearly lost their lives to electrocution. According to our findings, the victims were removing charcoal from one of the ovens used in burning woods into charcoal when electrical complications occurred, leading to their electrocution. Though they didn’t die in the incident, the situation still remains; no personal protective equipment. 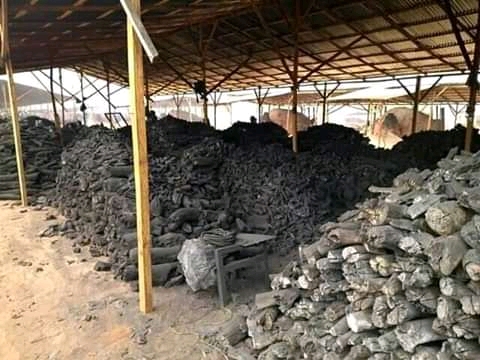 Although high exposure to black carbon particles that come from the charcoal is linked to heart attacks and cancer, many of the factory workers do not wear face mask. While some told Within Nigeria that face masks were not given to them, others said they did not like wearing them because of heat.

While charcoal production is laborious and dirty, the workers are poorly paid. Those that cut and stack the logs in the oven are paid N12, 000 for filling each oven. The men that remove the hot charcoal from the oven earn N15,000 for the task while the women that sort out the charcoal from sand are given N4,000 for each oven’s load. 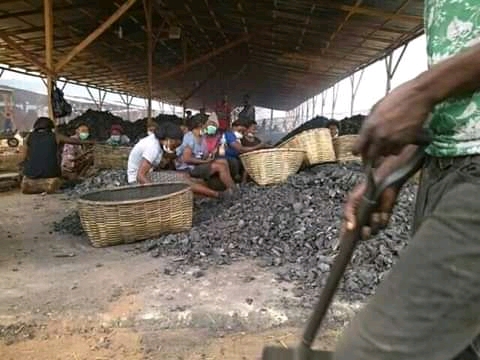 The rest of the workers are paid on a monthly basis. The women that cut the charcoal into regular shape earn N28,000 monthly while the women that arrange the pieces of charcoal in the cartoons are paid N25,000 monthly. To earn the N25,000, each person must fill 10 cartoons in a day.
Our investigation revealed that no permission or excuse, even if it has to do with ill-health, is granted by Kwo Chief as far as their workers are concerned. The victim forfeits his/her one month salary when case arises.

Prostitution in the camp

In view of the poor remuneration of workers, many female workers of the usually engage in prostitution in order to make both ends meet. A male worker at the factory who preferred anonymity told our reporter that: “A lot of things happen in this factory. Many of our co-workers, especially females, sell their bodies to make money. They engage in prostitution because what they pay us here is too meagre to sustain anybody. Moreover, there is no check on such kind of promiscuous behaviour here.”

Explaining further, he said: “After the day’s job, you are free to mingle but many of them abuse the opportunity by engaging in selling their body.”

Further investigation showed that civil servants at the Enugu State Forestry Commission have known about the charcoal production by the Chinese for some time now but say they are “powerless” to stop the illegal activities.

Their reason is that the Chinese have bribed politicians to allow them produce charcoal and they do not want to lose their jobs by shutting down the charcoal factories.

“We’re even afraid of visiting those factories in the bush,” said a member of staff of the state’s Forestry Commission. “The Chinese bribe our politicians to destroy our forests. Politicians close their eyes to the evil the Chinese people do here.”

The fears expressed by civil servants are not unfounded. When our reporter visited the charcoal  factory in Obimo, there are armed guards with Kwo Chief Investment Ltd written on their shirts while policemen move around the factory with the Chinese manager. The locals told our reporter that since the Chinese first arrived to build the factory till date, they have been guarded by soldiers.

Reaction of the locals

While many of the community dwellers see the factory as a huge employment hub for the community and environs, others see it as a disaster waiting to happen. 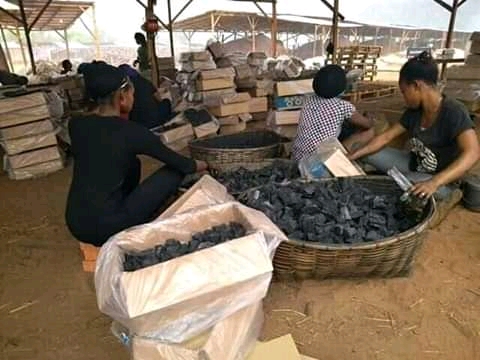 One of the community dwellers, Chief Christian Ugwu told Within Nigeria “The factory has helped reduce the otherwise high level of unemployment in this community. Many of our young boys and girls now go there to look for their daily bread. It is a huge blessing to this community.”

In a contrary view, another indigene of the community, Mr. Kelvin Ezeaku explained: “I am so much disappointed at what I am seeing in that factory. How can government close its eyes to such ecological havoc? Imagine the number of trees that have been felled because of that factory and there are obviously no plans to replant them. It is very appalling, to say the least.”

Despite the mixed reactions trailing the establishment of the factory, the place bubbles with activities. On the left hand side, facing the factory’s entrance, a 40-foot container on a trailer is being loaded with cartons of charcoal. Behind the trailer are mostly women and children selling foods under cashew trees. Other women hawk snacks and soft drinks to the workers around the factory.

On the first long row of sheds with zinc roofs, groups of six men feed logs of wood into ovens built with bricks. Smoke emits from already covered ovens which burn the logs slowly without oxygen. Shirtless young men scoop hot charcoal with long shovels from the ovens while other men throw sand on a pile of hot charcoal. Women sort out cooled charcoal from the sand and move the charred material in wheelbarrows to the cutters.

On the second row, women use machines to cut the charcoal into smaller regular shapes. Groups of five young women sort and arrange the pieces of charcoal in cartons that have cellophane inside. Each carton is weighed by the women to ensure it is within 10 to 11kg before being taken to the warehouse built with woods.

However, when Within Nigeria visited the factory at Obimo to speak with the Director, he was said to have travelled out of the country. All efforts to speak to him by phone proved abortive.

In the same vein when our reporter visited the traditional ruler of the community, HRH Igwe Spencer Ugwuoke, he declined comment on the issue.