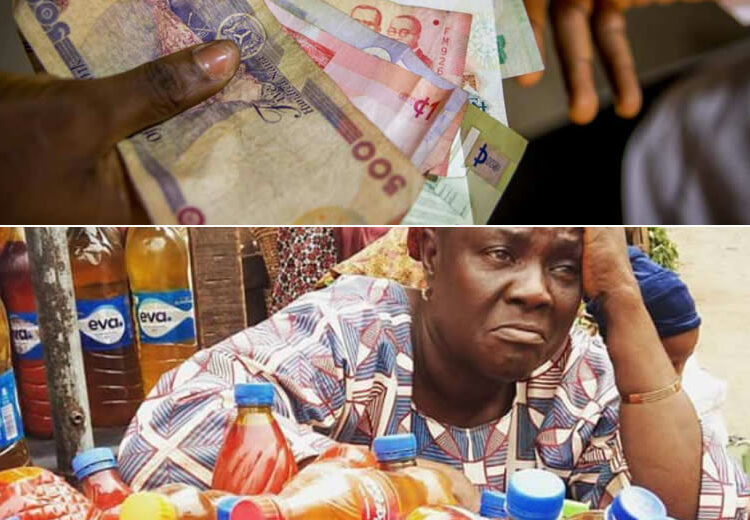 The deterioration of Nigeria’s economy has pushed forward many narratives which include the adverse effect on citizens especially women and children. Inflation, hunger, continued and systemic elimination of the middle class have not helped the situation too.

The increasing rate of poverty has also made life tougher for average citizens. As the economy bits harder, standard of living is deteriorating. Against all odds, some Nigerians are struggling to meet up their demands while others just want to earn a living.

Despite the struggles of every Nigerian, majority still live in penury and sometimes the amount of work done does not guarantee basic needs such as good water, food and shelter.

According to the Washington-based bank, the number of poor Nigerians is projected to hit 95.1 million in 2022. This data, a product of statistical findings has asserted the speculations of economic analysts and lamentations of average Nigerians that the country’s economy and its prosperity is in shambles.

This sad development comes with certain economic situations with damning consequences on Nigerians especially women. In pursuit to investigate or reveal one of the many consequences of the deteriorating economy, WITHIN NIGERIA conducted a survey among market women, small scale entrepreneurs and observed that most businesses survive on loans.

Why most market women live on debts

Some market women, entrepreneurs spoke with WITHIN NIGERIA and revealed why most businesses survive on debts. This reporter made it a gender-based considering the overwhelming number of women who were affected by the deteriorating economy he interviewed.

A 39-year-old woman simply identified as Omowumi Adekola told WITHIN NIGERIA that she started her business with N80,000 as capital in 2018 but she could barely account for N15,000 as at now.

Nobody stole my goods. Fire did not raze my shop. I just noticed that expected profit and part of main capital I used in setting up my business can not be accounted for, the mother of three said.

When asked what could be responsible for such development, the resident of Osogbo claimed responsibilities gulped the larger percentage of the fund.

“I am responsible for the upkeep of my husband and three children. I feed them and pay my children school fees. As I speak to you, I bought most of the goods you see here with loans”, she added.

Another trader identified as Omolola told WITHIN NIGERIA that she has connections with some wholesalers who give her goods at lesser price but sometimes she sells at same rate due to competition among brands.

The mother of five disclosed that the little gains she derived from the sale of goods are either used to clear debts or diverted to settle bills within the family.

The native of Aramoko in Ekiti state while lamenting the non-chalant attitude and intentional neglect of responsibilities of her spouse said she once had suicidal thought when debts grew higher.

A 45-year-old woman identified as Pelumi also narrated how sole responsibilities such as provision of food, payment of tuition fees and house rent wrecked her business.

Pelumi, a resident of Owo, a community in Ondo state told this reporter that she started her business with a capital of #450,000 but it started declining when her husband absconded and abandoned her with four kids.

I started with selling of food items such as bags of rice, semovita, wheat among others. When my husband abandoned the family and I became the sole financier, my business started declining. Now I’m recovering but I have debts to settle, she added.

A loan shark is a person who offers loans at extremely high interest rates, has strict terms of collection upon failure, and generally operates outside the law.

A check by WITHIN NIGERIA revealed that most loan sharks in Nigeria operate online through apps but there are some loan sharks in disguise of microfinance banks.

Lift Above Poverty Organization (LAPO) is a Nigerian organisation with a microfinance bank dedicated to self-employment through microfinance and a non-profit community development organization focused on the empowerment of the poor and the vulnerable.

LAPO is like two sides of a coin. It has both positive and negative impacts. As LAPO takes credit for start-up businesses, its means of retrieving loans have adverse effects on its beneficiaries.

A 28-year-old woman simply identified as Rukayat told WITHIN NIGERIA that she received a loan of #30,000 from LAPO to kick off her yam business.

According to Ikorodu resident, the loan was meant to be paid in batches (N3,000 every three days).

“I thought there would be good sales but I was wrong. I could not pay for six days and they started harassing me. They would call my relatives and threaten to arrest me. I later ended up taking another loan to clear it off”, Rukayat said.

The lamentation of another woman simply identified as Mummy Moyin was not different too. She told this reporter that she took a loan at LAPO and went through hell because she could not pay up as agreed. Mummy

Moyin narrated how she sold household items and goods in her store cheaply to clear off the debts to avoid harassment.

Entrepreneurs who took loans from ‘loan sharks’ via online also narrated their ordeals.

A fashion designer identified as Ifeoluwa told WITHIN NIGERIA that she took a loan of 50,000 via online from one of these loan sharks to promote her business.

“I could not return the loan as agreed due to poor sales. I do not know where they got my friends’ contacts. They sent messages to friends and clients that I owe them. This sad move eventually killed the business but I’m still surviving”, she added.

Racheal, a manufacturer of liquid soaps also shared same fate with Ifeoluwa. She also sought for a loan of #20,000 from one of these loan sharks.

“I felt embarrassed when friends and clients were calling me to refund the loan. I really do not know where they got those numbers from’, a rather sad Racheal lamented.

When a woman in her fifties fondly called Mummy Ayo narrated her experience with popular loan shark, “Komulelanta”, it was indeed an emotional tale. She acted strong but could not control tears when emotions appeared stronger than her courage.

She told WITHIN NIGERIA that she took a loan of #40,000 to kick-off her business and she was doing fine until robbers visited her shop and emptied it.

“They did not only ruin the business. They also ruined my peace of mind. I can not walk freely nor sleep in peace. Recently, I was dragged to a police station where I promised to repay the loan. I have been running helter-skelter with no hope in sight”, Mummy Ayo told WITHIN NIGERIA.

Sale of Goods on Credits

Ibukun Adedipe, a 32-year-old woman told this reporter that she has a responsible husband and she did not take any loan as start-up capital for her business.

Ibukun, a resident of Apete, a community in Ibadan said selling of goods on credits killed her business and the nature of her business warrants such.

She said, ‘I sell foodstuffs. My main customers are women. Whenever they want to patronize me, they come with excuses. They will buy foodstuffs on credits and promise to pay back’.

A rather sad Ibukun said most customers would abandon her shop, ignore her calls or avoid eye-contact after buying goods on credit. Sometimes they pay half of the money and buy more with a promise to pay in full in next transaction.

Another trader simply identified as Bimpe also decried the declining state of the economy and called on government to address it holistically.

Bimpe who is a resident of Ijebu-Ijesa complained bitterly about the rate at which people buy goods on credits and cited the deteriorating economy as the cause.

“I am a woman too. It would be difficult for me to turn a fellow woman down after she had already narrated her plights for me. Barely a week, a woman came with two kids to buy foodstuffs on credit and promised to pay back within three. As at now, she has not made any refund but she is still promising me. That is what the economy has done to all”, she narrated.

When contacted, a business expert identified as Adelakun Fiyinfoluwa told WITHIN NIGERIA that the country is at a cross-road and urgent steps must be taken to rescue the people from free fall into extreme poverty.

Fiyinfoluwa, a graduate of economics at the University of Ibadan said more Nigerians will definitely become poor if the federal government does not introduce new policies that would protect market women from loan sharks and do more in terms of monetary supports.

Citing COVID-19 pandemic, Russia-Ukraine war among others as factors responsible for deteriorating economy, Fiyin said the world is passing through its darkest hour.

Fiyin who lauded other countries for taking major steps to relieve the burden of their citizens through policies slammed the federal government for providing no clear alternatives except sharing of funds among selected few.

However, Fiyin commended the Tradermonie scheme and appealed to the federal government to be intentional about it.

He asked the Federal Government to expand the scheme and ensure it has no political undertone because it would reduce debts citizens especially women incur for business.

While commending the actions of Federal Competition and Consumer Protection Commission (FCCPC) for banning at least 35 loan sharks in the country, the UI graduate charged the ministry to do more by enlightening the people and prosecuting loan sharks for exploiting the vulnerable.

Fiyin also charged state governments, individuals and NGOs to invest in women and assist them in growing their businesses.