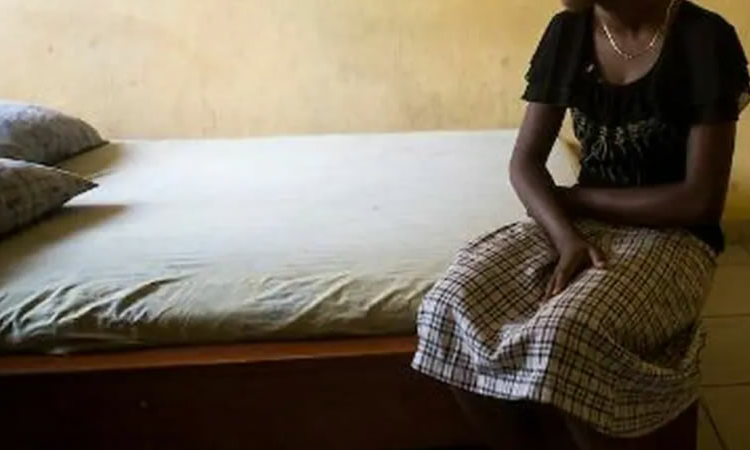 At the second entrance of this brothel, a young lady putting on a blue sweatpants and a short-sleeved patterned shirt sits on a bench facing the brothel’s passage dimly lit by a mix of red and blue blub.

As she seldomly stared at other girls dancing to a remix of popular songs being played by the DJ, she was also editing pictures she had probably taken during the day.

This reporter tapped her shoulder and asked “Shall we dance?”,

I’m not here to dance but to make money, she replied.

This reporter insisted and handed over the sum of N500 as a fee for the dance.

The young girl smiled and nodded in affirmation to my request as I took her hand and gently warped her into my arms.

She was so free, allowing the rhythm control her body movements as she intentionally positioned her butts to arouse this reporter.

While people watched us in amusement, she held this reporter closely with one hand, using the other to brush across his body at the lower part.

The dance became more intense as she began to withdraw the other hand, replacing it with her butt.

This reporter softly drew her closer and whispered to her ears.

“Can we leave this spot and go somewhere?” this reporter asked as she continued with her seductive dance.

“It is too early. I have not made enough money. We can only enter my room”, she tells this reporter as she pointed towards a partitioned place dimly lit with a green bulb.

From Kogi to Osun

As they walked into her room – a very small room with a fan, bed, basket filled with used tissues and condoms and clothes packed at a side, this reporter asked her name.

“My name is favour (not real name)”, she replied.

“That is my ex-girlfriend name. She broke my heart and I’m still finding it hard to move”, says this reporter to drag her further into conversation.

She laughed and urged this reporter to move on because he is getting older, saying life is too short to waste time on worries.

Won’t you marry too? You are also getting older and time is not on your side too, this reporter said.

I am just 20-year-old now. And I have a boyfriend in Kogi. We are different because you have no one, a rather happy girl said.

“Are you a native of Kogi?” this reporter asked.
Yes, I am from Anyigba but my boyfriend is a native of Idah, she impatiently replied.

You like talking too much. You are wasting my time, says a curious Favour as she picks up a condom lying beside her bed.

How to spend a night in the brothel at fair charges

Can I pass the night here? I prefer night sex, this reporter quietly asked. It will cost you #5000 for four rounds and preferred styles, she responded.

I disagreed with the fee and we later agreed on #4000 per night.

As this reporter walks down the pathway, he saw Favour and her recently discharged client moving towards the entrance of the brothel.

So you are still here, she laughed. She cleaned her room, emptied the bin and changed her bedspread. She invited this reporter to her bed.

A victim of divorce and abuse

Favour told this reporter that she started this business at at age of 17 after she abandoned school in SS2.

“My mum separated from my dad. She left the house and abandoned us. My dad remarried and we were treated with disdain by the new wife”.

Narrating the abuse she suffered while living with a relative (uncle), Favour said she would wake up around 4:30 to wash clothes and plates, sweep the compound and cook food for the entire family.

They vowed to enroll me in school but I was used as househelp. I did not complain nor leave the house until the wife of my uncle died. It ruined everything because she was the breadwinner of the family, favour added.

“I left their place but could not go back home. I had to search for an alternative source of livelihood”.

Favour went out around 11:00pm with a bucket, a towel and a soap case.

She asked this reporter to either sit at the bar or hang until she comes back.

Barely 12 minutes later, she came back and allowed this reporter in. She wore a lighter dress and lied down at one side of the bed.

You better lie down and allow us to do one round before 12pm, a rather tired Favour said.

“I love it hard and real but you seems tired. Let me allow you to rest very well. If it’s just one good round, it is fine”, this reporter told Favour.

Did you start this job after leaving your uncle’s place? this reporter asks Favour as she plays with her phone.

She narrates how a big sister (name not mentioned) introduced her to the business.

“She travels for weeks and only come home during festive periods. She always come home with a lot of gifts. We no know na Ashewo work she dey do”.

Favour also explains how she asked her to join the sex trade and even travelled to Edo for six months before things went sour between them.

“I followed her to Edo State and told me never to disclose her job to anybody in Kogi. We used to see her as a trader. I was under her tutelage and lived under her roof for six months”.

“I would give her all my earnings because I live with her then. Sometimes, she would give me little money to buy basic things. I overlooked everything until we came back to Kogi”.

“She was planning another trip when I absconded. I have been in Osun for more than three months and I plan to leave soon”, says Favour as she struggles with sleep.

Division of labor, seniority at the brothel

There was peace and solemn in the room until a jolting but steady thumping sprang from the door. The knock was heavy and deafening.

Favour!!!, a feminine voice shouted the name of my host.

The lady came to wake her up for morning duties. She was worried why she woke up late and wanted her to come and perform her morning duties immediately.

It is my turn to sweep the entire compound and empty the bin, says Favour after attending to her superior.

This reporter wakes up and observes it’s already 6:00am.

Favour looked into this reporter’s eyes and kept mute for a second. Some thoughts probably crossed her mind and she seems not ready to discuss it.

When are you leaving? She asked this reporter as she prepares for her morning duties.

This reporter thanked her and handed over the agreed sum of money to her. A worried Favour receives the money and watches this reporter leaving the brothel.