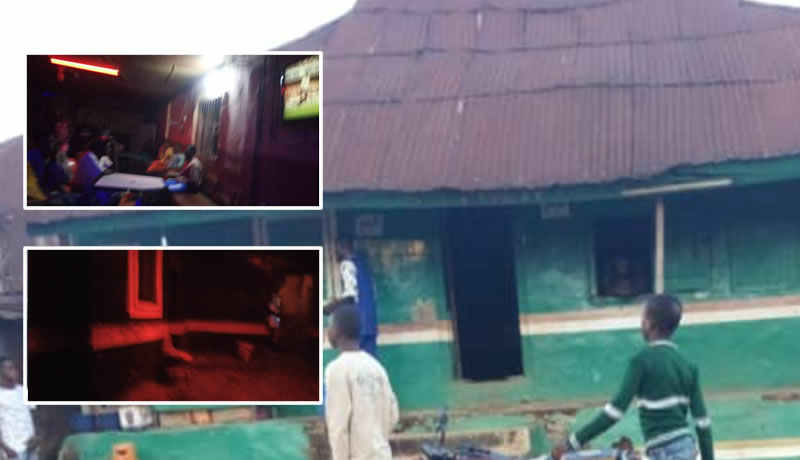 On a Saturday evening, WITHIN NIGERIA visited one of the popular brothels in Ilesa, a community in Osun, Nigeria. The brothel is fondly called ‘Adams’.

This reporter alighted from a motorcycle and observed that some attendants dropped at a junction beside Total filling station along Odo-Oro garage and carefully walked to the brothel.

When this reporter fixed gaze on the building, he noticed a short inscription ‘Smoking of Indian Hemp is not allowed here’ at the entrance of a building.

This inscription boldly written in capital letters is located at the left side of the entrance wall which accommodated a young dude in his late twenties who cook noodles for living.

The entrance wall of the building was painted green with a touch of white and ash as stripes. The building has a door and two windows at the entrance.

This reporter entered the building and walked through a passage of colored bulbs. He paused and allowed his eyes to adjust to the dim light.

As this reporter gently walked through four rooms divided into eight spaces, he was welcomed by young girls who wore gowns made from showy material that accentuated their figures.

They displayed their figures, inviting men to their beds while some girls were seen touching men’s private parts for sexual arousal.

As this reporter stepped forward, he landed in an open space used as bar. It’s populated with several plastic chairs and tables with a small wooden structure as office for the bar man. It also has a section for the DJ.

This reporter moved closer to the bar man, ordered for a bottle of cold drink and sat down to watch televisions hanged on the wall for interested viewers.

While dancing to songs being played by the DJ, this reporter moved around the brothel to access young girls.

At the rear end of the bar, he saw two tables populated by some young people within age bracket (20-30) smoking wrapped items heavily and dancing unpleasantly.

As at 6:30pm, more girls trooped out and started dancing with clothes displaying their figures as they drag men to themselves, inviting the vulnerable ones to their beds.

This reporter approached a brown-skinned young lady with a simple body structure and scintillating smile. The lady simply identified as Goodness (Not real name) is a native of Kogi and arrived to Adam’s brothel barely six months ago.

She was soft, warm and cool but uncomfortable with prolonged discussion. Let us go to my room and have sex. I have a target because I got a lot of bills to clear, she told this reporter.

When we got into her room, this reporter saw a standing fan, tissue paper, pack of condoms, small-sized bed, cottons on the walls and clothes scattered at the back of the standing fan.

Goodness (not real name) asked this reporter to sit on the bed placed on a wooden structure while she removed her short skirt, leaving the top and grabbed the private parts of this reporter. We have not discussed the charges, this reporter quietly said.

Goodness (Not real name) further stated that if customers took drugs and lasted longer than usual, they would either add more money or step aside.

This reporter jokingly collected her number and promised to invite her to his house for full package because he likes to have sex in comfortable areas.

Her countenance changed immediately. She was visibly angry and accused this reporter of wasting her precious time. This reporter gave her N1000 note, flashed her number and both left the room.

When this reporter left Goodness (not real name) room, he went back to the bar and continued dancing to songs being played by the DJ.

A chubby lady wearing a short jeans knicker identified as Chioma (not real name) approached and danced with him for a minute before she whispered into his ears that they should go to her room.

When we got into her room which was among the first four rooms at the entrance of the building, this reporter saw tissue papers, foam covered with wrapper, pack of condoms and a basket filled with used condoms and tissues.

The native of Anambra and diploma holder of a private polytechnic wanted to remove her short jeans but this reporter stopped her.

‘Let us discuss charges first. I am new here’, he calmly asked.

Chioma (not real name) who was not ready for long talk quickly replied that normal sex is #1000 and doggy style is N1500.

Riding is also N2000. Sucking and foreplay before sex is #3500. Short-time service at home is #3500 without transport fare. A night stand is #7000 and if you want a crazy fun, buy me alcohols like Lord or Seamans, you will never regret it, she added.

This reporter requested for her money and vowed to call her for night parole. She was visibly angry and sent this reporter out of her room. She told her friends about the incident, saying that I wasted her time.

After the whole episode with her, this reporter looked everywhere for her to give some cash but she was no where to be found.

A friend later told this reporter that she already moved in with another person. When this reporter later saw her, she was already on another task.

This reporter witnessed a situation where a young man in his early thirties obviously richer than usual customers entered the brothel.

The young man sat down beside a cushion chair meant for the owner of the brothel and they were seen joking with each other.

Barely ten minutes, two young girls including Chioma (not real name) came to his seat and started drinking with him. One was seen massaging his feet while the other was seen playing with his beard.

They continued joking until he followed the two girls into the room. They spent a couple of time together before they came out one by one and resumed back to their seats at the bar.

As some customers watched in amusement, the girls were busy with massage while nodding their heads to appreciate songs being played by the DJ.