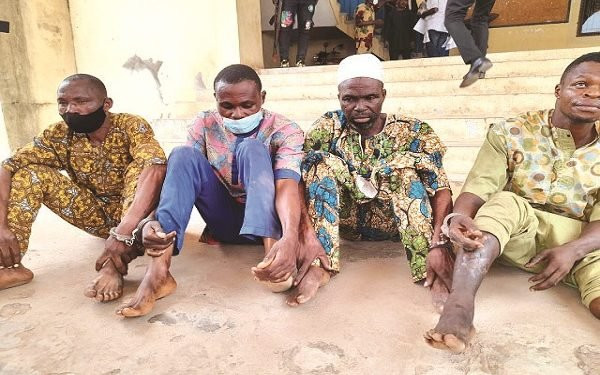 Four persons have been arrested by operatives of the Ondo State Police Command for allegedly stealing phones during the second term inauguration of Governor Oluwarotimi Akeredolu.

WITHIN NIGERIA learnt that the suspects who were identified as Ojo Femi, 30, Abiodun Adewale, 45, Kayode Olarewaju, 45 years and Aiwole, 25 committed the offence at the event held at the Dome.

According to report, the four persons were apprehended by men of the Operation Scorpion Squad on the Ilesha-Akure Road while returning to their bases in Oyo, Osun and Kwara states.

Speaking on the development, the police public relations officer in the state, Tee-Leo Ikoro said seven phones stolen at the inauguration ceremony were recovered from the suspects who would soon be charged to court.

In other news, WITHIN NIGERIA reported that Gov. Oluwarotimi Akeredolu of Ondo State says he plans to focus on agriculture and youth empowerment during his second term in office.

Akeredolu said this at his inauguration for second term in office alongside his deputy, Mr Lucky Ayedatiwa on Wednesday in Akure.

He promised to revolutionise agriculture by taking practical steps towards harnessing the full potential of the state.