A 22 year old student identified as Shedrack Wilson was on Monday, March 8, sentenced by a Jos Upper Area Court in Kasuwan Nama, to one year imprisonment for stealing a mobile phone.

The Judge, Daniel Damulak, convicted Wilson after he pleaded guilty to the one-count charge of theft and begged the court for leniency.

Damulak, however, gave the student an option of N20,000 fine, according to NAN.

The prosecutor, Ibrahim Gowkat, had told the court that the case was reported at the A Division Police station, Jos, on January 31, by one Joseph Okopi.

The complainant said Wilson, who resides at Gada Biu, dipped his hand into his parked car and picked an iPhone 6 valued at N108,000.

His alarm attracted persons nearby who chased and apprehended the culprit.

Deborah Samuel: Why I deleted post condemning killing of student over… 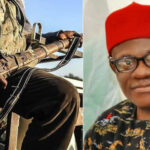