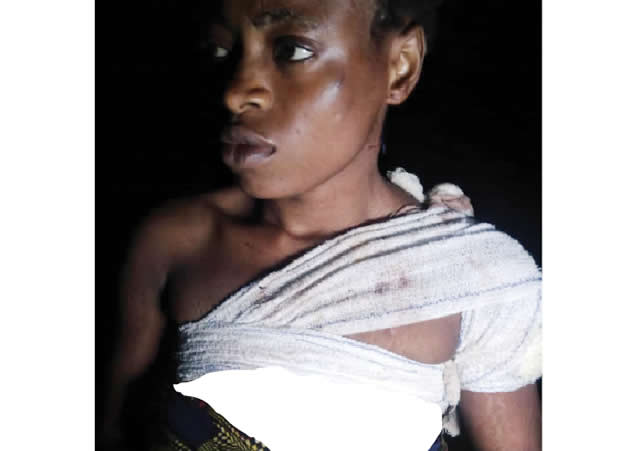 Police has arrested one Mrs Obasi Uchenna and her daughter for allegedly stabbing a 27-year-old nursing mother in Asaba, the Delta State capital.

It was gathered that the incident occurred on Friday and the victim is battling for survival at the Okwe General Hospital, Asaba.

According to a human rights activist and Director Young Nigerian Rights Organisation, Mr Victor Ojei, the victim was stabbed several at her breast.

He said, “I was in my house when the husband of the lady came to show me what his neighbours did to his wife. When I got there, I discovered that it was a serious case. I took her to the police station to report the case. Thereafter, I took her to the hospital.

“After the investigation, we discovered that the 27-year-old mother of one didn’t do anything to her two neighbours who stabbed her several times and shaved her hair. They had a quarrel and both Uchenna and her daughter told the victim that her husband, a bus conductor, was an impotent man.

“She cautioned her neighbours to stop the joke of calling her husband impotent. But instead, they entered her apartment, dragged her out and pinned her to the ground. Uchenna used a scissors to cut her hairs while her daughter used a razor blade and kitchen knife to stab her several times on her breast.,”

Ojei called on the state Ministry of Justice sexual offence and domestic abuse department and the State Criminal Investigation and Intelligence Department to ensure that justice was served in the case, alleging that the suspects had been released by the police.

The acting State Police Public Relations Officer, Bright Edafe, who confirmed the incident said, “It is not true, nobody has been released. We should not forget that the courts are on strike. The information I have for now is that the two suspects are still in detention.”