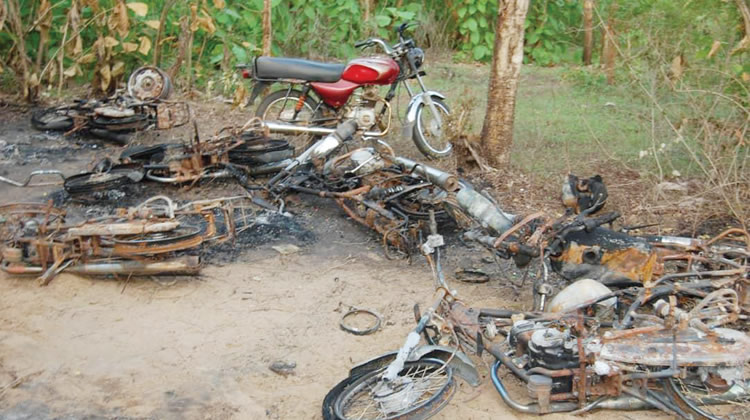 Sani Haruna, one of the 26 vigilantes, who were recently ambushed by Fulani bandits while on a mission to rescue a medical doctor and nurse kidnapped in the Imeko-Afon Local Government Area of Ogun state narrated how he was shot 20 times.

The hunter during an interview with The PUNCH, spoke about his encounter with the daredevil. kidnappers.

Can you introduce yourself?

My name is Sani Haruna. I am an indigene and a resident of Imeko-Afon Local Government Area of Ogun State. I’m educated; I am an NCE (National Certificate in Education) holder from Yewa Central College of Education, Abeokuta, where I studied Economics and Social Studies. I graduated in 2008 but because there was no job, I volunteered to join So-Safe Corps, a vigilance group in Ogun State. I am not being paid any allowance or wage as a member of So-Safe Corps; the aim is to protect our people and that is fulfilling for me.

Since you are not paid for your services in So-Safe Corps, how do you earn a living?

Your team was recently ambushed by bandits while on a mission to rescue a medical doctor and a nurse from kidnappers. How did it happen?

When the doctor and the nurse were kidnapped, we, the hunters, were called upon. The Amotekun Corps and Oodua People’s Congress were also called upon but they were not available. As someone born into a family of hunters, I have a good understanding of the forest. The mandate given to us was to rescue the kidnapped doctor and nurse. The kidnapped doctor is an indigene of Ijebu-Remo. So, we, hunters and members of So-Safe Corps, mobilised and arranged 10 motorcycles and two vehicles for the rescue operation.

Who owned the motorcycles and vehicles?

I owned one of the bikes; it was a brand new Bajaj. My friend also owned one. Three members of the group came with their bikes too while we rented five more. We were 26 men in total and we moved on Thursday, April 8, 2021.

Our first stop was at a big rock called Amule. We already had information that the kidnapped victims were being taken to the rock by their captors. But when we searched the rock and its surroundings, we didn’t see anyone. So, we moved on. At around 10pm, we were already close to Ibarapaland in Oyo State, a distance of about 50 kilometres from Imeko, where we took off from. We stopped at a rock called Odetedo and we also searched the place.

As some of our men went in the direction of the rock area, some of us stayed outside. Then we observed that some people on motorcycles flashed light on us as they approached where we stood. I told the boys to be on their guard. I quickly left them to lie in ambush by the roadside. I hid myself some 10 metres away from the roadside. As those people approached, I perceived they were criminals, so I attacked the first bike rider and he fell down. The others coming behind him fell down too.

How many were these assailants?

They were about 15 men. They were on five bikes, three on each bike. I flashed my torch and saw that the first bike rider wore a green uniform and a green cap like the Army uniform. I told him we were officers and that we were security men like them, but the man replied, ‘Kai, officer kini? Damboroba!’ And before I knew it, he started shooting at me. I called out to the other hunters to flee for their lives. I told them to leave me alone to face them because some people in our team had no experience and stamina to withstand such an attack.

I then began to exchange gunshots with the kidnappers. The gunfight lasted for between three to four hours and unfortunately, some of the bullets hit me.

Where did the bullets hit you?

Were you able to kill any of the bandits?

I can’t say for sure but I am sure that they also went away with bullet wounds, though their weapons were more sophisticated than ours. They had AK-47 rifles and pump-action guns and also a small weapon that sounded like a bomb.

What type of guns did you and your men carry?

We carried Dane guns and other local ones.

You said you were hit by over 20 bullets. How did you survive?

God’s grace is sufficient in all situations. I stood up to the kidnappers by the grace of God. If I say, it was through charms, I will be deceiving myself. The truth is that no matter what we do to fortify ourselves, without God, it will fail. I will say I survived because God answered my prayers.

What did you do about the gunshot wounds?

I am still treating the gunshot wounds in the traditional way. From our findings, the bullets the bandits shot were not ordinary; so, it is not advisable to settle for hospital treatment. But I thank God that there has been some improvement.

How did the shootout end?

About three hours into the gunfight, one of the Fulani bandits told his people to change their bullets. When they did, the bullets wounded us, so my colleagues and I began to flee into different directions. The bandits came after me and chased me for some minutes, shooting heavily but I was able to escape into the bush. My fellow hunters and I later found ourselves, and made our way to Oyo State that midnight. We later travelled back home and discovered that the two vehicles and nine of the motorcycles had been burnt by the bandits.

Can you give the description of the exact location where the incident happened?

It happened just after Abafun River, around Oyan River around the boundary between Ogun and Oyo States; the place is very close to Ibarapa and Oke-Ogun in Oyo where herders have been making trouble recently.

Did any of your men die in the attack or as a result of gunshot wounds?

To the glory of God, nobody died among the 26 of us that were ambushed.